You are here: Home / Access to Healthcare / Depression takes its toll in Mumbai – and in India 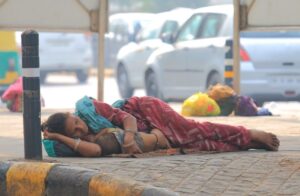 Mental health is one of India’s most significant public health challenges. 13.7 percent of Indians suffering from some form of mental health disorder.

In Mumbai, the scourge of poor mental health is particularly felt among those aged between twenty and thirty according to recent data. Depression affects forty percent of people in this age bracket, a survey reveals. Concerningly, 49 percent of women and 38 percent of men interviewed reported feeling depressed all the time.

The survey’s findings suggest social media and body image issues to be driving forces behind the high rate of depression among young people in Mumbai. 79 percent of women and 68 percent of men said they were on “all social media platforms” and almost half of respondents said they spent between five and ten hours on social media daily.

Poor body positivity also dogged respondents. 79 percent of women surveyed and 68 percent of men surveyed reported they were unhappy with the way they looked.

“49 percent of women and 38 percent of men interviewed reported feeling depressed all the time.”

The survey lends an insight into the poor mental health of the Maharashtra state capital, which is reflective of a pan-Indian crisis. Indeed, the survey’s results come on the heels of findings that every third death from suicide in India occurs in someone who is aged between eighteen and thirty. In fact, India has the highest suicide rate among young people in the world. Students are a particularly vulnerable group, with one Indian student committing suicide roughly every hour.

It is clear that, among adolescents and young adults in India, depression and other mental health disorders are escalating crises. However, even as mental illness reaches epidemic proportions nationwide, just ten percent of Indians who need mental healthcare can avail it.

Recent steps were taken to increase access to mental healthcare for Indians, with the Insurance Regulatory and Development Authority of India (IRDAI) directing the nation’s health insurance firms to cover patients for mental healthcare.

Nonetheless, India continues to suffer staggering shortages of mental health professionals. There are just 898 psychologists in India. The country needs 2,250.  Without steps taken to compensate for this shortfall, the mental health crisis across all stratas of Indian society can only be expected to get worse.