You are here: Home / Noncommunicable diseases / Time for India to deliver on NCDs 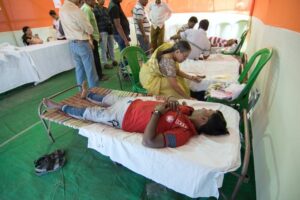 The World Health Organization (WHO) has issued a stark warning about the threat of noncommunicable diseases (NCDs). India should take note.

“NCDs and mental disorders currently pose one of the biggest threats to health and development globally,” a WHO high-level independent commission on NCDs said in their report released on Friday, June 1. It added, “failure to implement proven interventions is rapidly increasing health costs.” It goes on to warn that “continued lack of investment in action against NCDs will have enormous health, economic, and societal consequences in all countries.”

The threat of NCDs has been understood for some time. Responding to the manifold challenges they pose is considered imperative in promoting health and development in the developing world and lower-middle income countries (LMICs).

The Sustainable Development Goals (SDGs) – as outlined in the 2030 Agenda for Sustainable Development in September 2015 – contained a number of goals to be achieved by 2030 aimed at mitigating the impact of NCDs. These goals included reducing premature mortality from NCDs by one third; supporting research and development of and ensuring affordable access to medicines and vaccines for NCDs; and introducing measures to control alcohol and tobacco consumption.

These are areas where India has a decidedly mixed track record. NCDs account for 61 percent of deaths in India. This translated to 5.81 million NCD-related deaths in 2016. The risk of dying prematurely due to an NCD in India is 25 percent. In the 30-70 age bracket, three major NCDs – cancer, diabetes, and heart disease – account for 55 percent of premature deaths.

The impact of NCDs in India is observable not only in their high death toll, but also in their cost to the economy. A November 2014 report estimated that “India stands to lose $4.58 trillion before 2030 due to NCDs and mental health conditions.” Other estimates place the cost even higher, at $6.2 trillion.

Public sector hospitals – already overburdened while underfunded, understaffed, and underresourced – are not in a position to cope with the inevitable increase in demand that would accompany the anticipated uptick of NCD patients.

This is bad news for patients, especially India’s poorest. Many will be faced with a devastating dilemma. Either they forego vital treatment or they pay for it themselves. The former would imperil them. The latter option could impoverish and indebt them.

Further complicating the issue are the disparities between Indian states. As recently covered by Health Issues India, India’s progress on healthcare has not been evenly dispersed between its states and union territories. Some, like Goa, have made significant improvements in the past two decades. Others, like Assam, lag behind. This has had a detrimental effect on India’s overall effectiveness in dealing with a range of public health challenges – be they infectious diseases such as diarrhoeal diseases and tuberculosis or NCDs such as breast and cervical cancer and rheumatic heart disease.

The National Health Protection Scheme (NHPS), or ‘Modicare’, could go some way to reducing inequality and improving the health outlook of the nation and its people. It endeavours to extend health insurance coverage of up to Rs 5 lakh ($7,795) to around 500 million Indians.

Since its announcement in this year’s budget, the NHPS has solicited the approval the Cabinet and the endorsement of the WHO. However, it faces a plethora of obstacles. These range from implementory difficulties, such as the reluctance of some state governments, to more practical challenges, such as limited health infrastructure and projected overheads totalling as much as $1.7 billion a year.

Past schemes with similar goals – the Rashtriya Swasthya Bima Yojana (RSBY) being the most prominent example – have failed to bring down out-of-pocket health spending for the intended beneficiaries. It remains to be seen as to whether Modicare will make a difference in this regard or suffer the same fate.

What is clear is that the threat of NCDs to public health in India is too great for the status quo to persist. Many NCDs are chronic conditions requiring a lifetime of treatment. For NCD sufferers in poverty, being unable to avail treatment in public hospitals and subsequently forced to turn to the private sector will make their situation untenable.

Increasing access to healthcare is a vital goal for India. Similarly vital, however, is reducing the risk factor for NCDs – many of which are preventable conditions caused by lifestyle factors.

This is an area where India has experienced some success. Tobacco control is arguably the most prominent example of this. Between the 2009-10 and 2016-17 periods, as measured by the Global Adult Tobacco Survey, India reduced its number of tobacco users by 81 lakh (8.1 million). Policies to curb tobacco use – such as increasing the size of pictorial health warnings on tobacco product packaging – have proven effective methods of encouraging users to quit.

On other NCD risk factors, such as obesity, India is not faring so well. Despite the significant presence of malnutrition and hunger in the country, India is also battling a looming obesity epidemic.

Complicating matters is the rise of obesity among India’s youth. By 2025, India is expected to have more than 17 million obese children. This is compared to 14.4 million at present, including twenty percent of schoolchildren in Delhi alone.

Rising rates of childhood obesity lays the groundwork for a future crisis, as the multiplicity of health problems that can be caused or exacerbated by obesity typically manifest in later life. Unless India takes decisive action to curb its obesity rate or makes the requisite preparations to strengthen its health system, the consequences, for both the country and its citizens, could be dire.

Mental health is an area the WHO highlights in its report. It is an area where India underperforms.

Spotlighted as a potential epidemic by President Ram Nath Kovind, mental health conditions affect roughly 13.7 percent of Indians. However, just ten percent of those who require mental health treatment can avail it. Shortages of mental health professionals were among the issues highlighted by President Kovind in a speech delivered last year, with less than 2,000 psychiatrists and 5,000 clinical psychologists servicing the whole of the nation. This fuels the lack of access to mental healthcare for millions of Indians – including groups at elevated risk of suicide, such as students and farmers.

Furthering India’s mental health crisis are enduring sociocultural prejudices in India about those with mental health disorders. Women, in particular, are at disproportionate risk of such discrimination and prejudice based on their mental health.

The WHO report states that it is “time to deliver” on NCDs. This may be directed globally, but India should definitely consider them. The progress the country has made on its health indicators could come undone if its rising crisis of NCDs goes unchecked and, through a lack of action, unchallenged.

“Time to deliver: report of the WHO Independent High-Level Commission on NCDs” can be accessed here.