You are here: Home / Social issues / The inequality of improvement: What the HAQ Index tells India

Access to healthcare has improved in India since 1990 – but not enough. Meanwhile, inequality persists.

The country takes the 145th place out of 195 countries on the Healthcare Access and Quality (HAQ) Index. This measures the accessibility and quality of healthcare in countries by drawing on a plethora of data, including the 2016 Global Burden of Disease study. HAQ is measured on the basis of 32 causes of death preventable with effective medical care. Countries are then scored between 0 and 100.

India’s score in the latest HAQ Index is 41.2. This represents an improvement from 1990, where it scored 24.7. Nonetheless, the score is low and incongruent with India’s status as one of the world’s largest economies. Indeed, the likes of Sri Lanka, Bangladesh and Bhutan rank above India in the list.

The Index makes it clear where the shortfalls lie in India’s response to the manifold public health threat it faces. In terms of infectious diseases, India scores particularly poorly on tuberculosis (TB) and diarrhoeal disease. Both are major public health challenges in India.

The danger of NCDs

NCDs currently dominate India’s disease burden and its mortality rate. It is an issue Prime Minister Modi has drawn attention to in recent months. Announcing the launch of seventy cancer institutes in April, Modi highlighted the fact that NCDs now account for more than sixty percent of deaths in India.

According to the study, India fares poorly in the tackling of multiple NCDs. These include several types of cancer, such as breast and cervical cancer – the most common types of cancer among Indian women.

With regards to cervical cancer, reports earlier this year suggested India’s health ministry would not include the human papillomavirus (HPV) vaccine in the country’s immunisation drive. This is despite the HPV vaccine being an effective method of preventing cervical cancer. Cervical cancer causes more than 80,000 fatalities every year. Introduction of the HPV vaccine and a nationwide screening program could cut rates of the disease and save thousands of lives. Neither are currently in place.

Breast cancer, meanwhile, is one of the country’s most prevalent NCDs. It is also the most common type of cancer among women. Survival rate for the disease is relatively low in India, at 66.1 percent. Despite the threat the disease poses, awareness is low. As such, the disease is often not diagnosed until its later stages, hence the poor prognosis for many of India’s breast cancer patients.

India fares poorly in its handling of many other NCDs, according to the HAQ Index. Ischemic and rheumatic heart disease, strokes, colon and testicular cancer, leukemia and chronic kidney disease, among others, take their toll on Indians. Though preventable and/or treatable conditions, they still cause widespread death and disability among India’s population. This suggests the country’s handling of them leaves much to be desired. 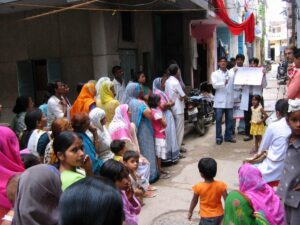 The impact of this broad plethora of conditions is exacerbated by another long-standing issue which plagues Indian healthcare: inequality.

Last year, a study published in The Lancet revealed extensive inequalities between India’s 29 states and seven union territories (UTs) in terms of their health indicators. This is reinforced by the findings of the HAQ Index.

India’s states and UTs were assessed and scored individually, in addition to the country’s national ranking. There was a 30.8 point difference between the highest and lowest scores. Goa was the highest-scoring state at 64.8. Assam scored the lowest at 34.0.

The gulf between the highest and lowest scoring states has increased since 1990. The difference in 1990 was 23.4 points. This suggests that, while Indian healthcare has improved, it has also become more unequal.

It cannot be denied that India has made much progress. Life expectancy is up. Rates of child, infant, maternal and neonatal mortality are down. The prevalence of infectious diseases such as TB and malaria are broadly declining. However, on these issues, and many others, India’s progress does not mean it should become complacent. Whilst the country’s political and healthcare leaders have much to be proud of, they also have much left to do.

A priority should – and must – be addressing health inequality.

The Lancet study can be accessed here.