You are here: Home / Social issues / The depression epidemic among India’s seniors 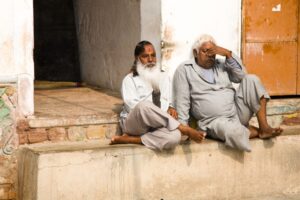 India’s elderly population is projected to reach more than 340 million by 2050. Could that result in a new mental health epidemic?

New data reveals that 21.9 percent of India’s elderly suffer from depression. This is a much higher rate than the global average. Fifteen percent of the world’s elderly population suffer from a mental disorder according to the World Health Organization (WHO).

The rise of depression among India’s seniors can be attributed to a number of reasons. As pointed out by the WHO, the elderly are vulnerable to a number of stressors which can trigger the onset of mental illness. These include illness, injury, a drop in economic status, and bereavement.

“New data reveals that 21.9 percent of India’s elderly suffer from depression…a much higher rate than the global average”

Loneliness is a prominent cause of depression among India’s elderly. A survey last year revealed that almost half of Indian seniors feel lonely – a figure that rises to 64.1 percent in urban areas.

Loss of financial security is another factor. A 2016 survey revealed that just a third of Indian seniors felt ‘financially secure’. The majority (65 percent) of survey respondents said they were financially dependent .

One of the driving forces behind poverty among India’s seniors is costs related to healthcare, the survey also found. In a country where two-thirds of healthcare spending is borne by the patient, it is understandable why so many of India’s seniors find themselves out of pocket when it comes to their medical costs. Old age carries elevated risk for a range of medical conditions. Many of these are chronic in nature. With illness and loss of financial status intersecting in this way, it seems obvious as to why the two in combination can have such a detrimental impact of the mental health of India’s elderly.

Mental disorders often go undetected in India’s seniors for a variety of reasons. This includes misdiagnosis by healthcare professionals and social stigma.

Mental health is the subject of much stigma in India, posing an obstacle for many with mental health conditions. The elderly may be disproportionately affected by this, as low standards of both elder care and mental healthcare across the country coincide to foster a silent epidemic of mental health disorders among a population whose health needs are already neglected.

The Centre is launching outreach measures to respond to the needs of India’s elderly. The National Programme for Healthcare of Elderly and the establishment of two National Centres for Ageing are two potential avenues of plugging the gaps in elder care. To ensure that India’s elderly population is fully cared for, however, such initiatives must incorporate training for outreach workers to look out for the symptoms of mental health conditions in Indian seniors and be able to either provide them with treatment and/or counselling or refer them for the same.