You are here: Home / Social issues / India’s population is ageing faster. What does that mean? 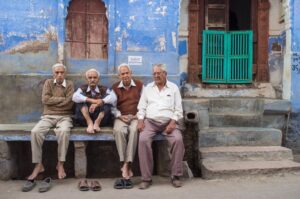 It is no secret that India’s population is growing, and growing fast. Home already to more than 1.3 billion people, the country is projected to supersede China as the world’s most populous nation by 2024. The population is expected to touch 1.5 billion people by 2030.

This population boom has coincided with a rise in living standards. Indians are now living longer. This, of course, is good news. However, it also means that the country is facing a rise in its elderly population, which will number more than 340 million by 2050 as Minister of State for Health Anupriya Patel told the Lok Sabha on Friday.

The news suggests that India’s population is ageing faster than previous thought. Past estimates posited the number of persons aged sixty or more to increase to 300 million within the same timeframe.

An older population is indicative of how far India has come in improving its health indicators. However, unless action is taken, an older population could also serve to highlight the gaps and weaknesses in India’s public health system.

With physical health infrastructure lacking in India, accessing healthcare may prove challenging for many older Indians in years to come. As a 2016 study pointed out, “geriatric care has remained a neglected area of medicine in the country”. It further notes that “most of the government facilities such as day care centres, old age residential homes, counselling and recreational facilities are urban based” – despite 71 percent of India’s elderly population living in rural areas.

“An older population is indicative of how far India has come in improving its health indicators. However, unless action is taken, an older population could also serve to highlight the gaps and weaknesses in India’s public health system.”

Elderly Indians are often forced to rely on their families to provide support – an expense many families may not be able to afford – or turn to charities such as Agewell India and the Dignity Foundation.

The good news is that the Centre is taking steps towards providing care for India’s elderly population. The National Programme for Healthcare of Elderly could go some way to plugging the gaps in elder care.

The initiative will involve visits by community health workers and the establishment of two National Centres of Ageing – facilities in the vein of National Centres of Excellence, which will seek to improve and build the government’s approach to elder care. The centres will be erected at the All India Institute of Medical Sciences (AIIMS) and at the Madras Medical College in Chennai.

India is revered worldwide for its affection and respect for the elderly. As the nation’s elderly population increases, both in need and number, the need is for the Centre to make good on this reputation by providing comprehensive services to preserve the health, wellbeing and dignity of the nation’s old.