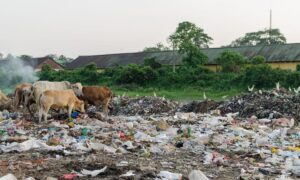 Imagine you were told your country produces 660,787.85 tonnes of plastic waste. Then imagine being told that that is not even forty percent of the story.

This is the worrying implication of a new report by the Central Pollution Control Board (CPCB), which reveals that its 660,785.85-tonne estimate for India’s plastic waste production reflects data compiled from just fourteen out of 35 regional pollution boards. This means that plastic waste production in more than sixty percent of India’s states and union territories is not accounted for in official figures for the 2017-18 period.

India is home to a lucrative plastics industry, worth Rs 110,000 crore and accounting for more than 30,000 companies and units. Plastic consumption in India is voluminous, meanwhile. Analysts suggest this consumption far exceeds the country’s capacity for recycling.

Indians consumed 16.5 million tonnes of plastic in 2017-18, according to a Down to Earth report published last year citing research by the Plastindia Foundation. That feature noted the official figure for the 2016-17 period as to how much plastic waste was produced – 1.6 million tonnes – is “suspiciously low” compared to the Foundation’s estimates for how much plastic Indians actually consume.

“In India, around eighty percent of plastic is discarded as waste.”

As noted by the Plastic Soup Foundation, “chemicals in plastic can cause cancer, heart failure, Alzheimer’s, dementia, Parkinson’s, arthritis, infertility and even damage unborn babies in the uterus.” Plastic which finds its way into the ocean can enter the food chain, exposing humans to a number of toxins.

This to say nothing of the impact of landfill sites where plastic waste is often sent. As reported by Health Issues India earlier this year, pollution at landfill sites contaminates groundwater, the air, and the land – posing a risk to health for many Indians, one which we may only be beginning to uncover the full extent of.