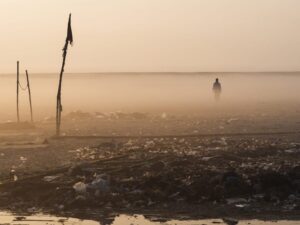 “It is dirty everywhere”, this is how Amish Das describes his home: Boragaon, a landfill site which sprawls across 94 acres of wetland in Guwahati City in northeastern Assam.

Amish, whose story was recounted in a feature for The Independent last year, has lived in Boragaon his entire life. His living is made through scavenging, as is the case for many of the fifteen million people worldwide who call rubbish dumps their home.

A one-room shack houses Amish and his family: his wife and three children, as well as his wife’s sister, her husband and their two children. Such overcrowding is common among landfill dwellers and allows for the rapid spread of infectious diseases such as diarrhoea and typhoid.

This does not even begin to cover the scourge of noncommunicable diseases (NCDs) that can arise from living on or even near a landfill site as a result of constant exposure to toxic gases. This can leave you vulnerable to no end of conditions, ranging from cancers to respiratory ailments to irritation of the eyes and skin.

Amish is well aware of the health effects of landfill sites, having lost his daughter to disease when she was just two years old. “Sometimes,” he reflects, “I am thankful she won’t have to know this life.”

“Just a quarter of [garbage] is processed. The rest is dumped in the open at landfill sites.”

India’s landfill sites have risen significantly in size and number as the country has urbanised at a meteoric rate in recent decades. This has led to cities spewing out 1.43 lakh (143,000) metric tonnes (MTs) of solid waste every day. Just a quarter of garbage is processed. Cities dump the rest – more than 100,000 MTs – in the open at landfill sites.

New data released by the Union Ministry of Urban Affairs shows that much of India’s garbage is left unprocessed. Just eight out of India’s 35 states and union territories (UTs) process more than half their municipal garbage. Seven states process ten percent or less of their garbage. Arunachal Pradesh state and Dadra and Nagar Haveli UT Dadra do not process their trash at all.

The data contains some good news. Door-to-door waste collection reaches 100 percent of citizens in 61,846 out of India’s 84,00 municipal wards. However, as waste output increases, the land available to dispose of the waste is rapidly running out. Analysts warn that around 88 square kilometres of land would need to be demarcated for landfilling if current trends continue. This an area roughly equivalent to the size of New Delhi.

Landfilling, meanwhile, pollutes the air, land and groundwater. This poses an enormous risk to public health. To make matters worse, once a landfill is closed, it is effectively unusable. The site then requires monitoring for thirty years afterwards.

To improve public health in this regard, the Center for Science and Environment (CSE) recommends segregating waste at its source and then recycling and reusing it when possible, rather than sending it to landfills en masse. Education campaigns to encourage citizens to reduce their output would also be of value, the CSE adds.