You are here: Home / Medicine and Research / Ventilators, oxygen and COVID 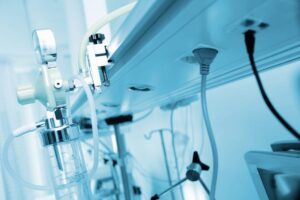 Of currently-infected patients, just 0.33 percent require assistance breathing with ventilators and 1.5 percent require oxygen support. 2.34 percent are in intensive care, the Minister said. The number of confirmed cases of COVID-19 in India – the disease caused by severe acute respiratory syndrome coronavirus 2 (SARS-CoV-2) or the coronavirus – surpassed 30,000 earlier this week.

“Our nation has the requisite national core capacities stipulated in the international health regulations to manage public health emergencies,” Vardhan said. However, concerns have been expressed about the preparedness of India’s public health system for a post-lockdown phase. Officially, India’s extended lockdown is due to end on May 3rd. Yet a Livemint analysis reports that, with restrictions relaxed and Indians returning from abroad, the number of cases could swell and the country could face a deficit of vital medical equipment, such as ventilators.

As the Livemint report states, “if infections continue to rise at the same rate in May as they have done so far in April, India could be facing a deficit in isolation beds by the end of May, and in intensive care unit (ICU) beds and ventilators by the first week of June.” It notes that eight high-burden states will bear the brunt, where cases have doubled every seven days or fewer.

In terms of medical oxygen, an IndiaSpend report notes the prospect of shortages which could be disastrous for patients in serious or critical condition, of whom fifteen percent and five percent would require medical oxygen respectively. Of 123 districts without a ventilator bed, the report notes, 39 have reported cases of COVID-19. Meanwhile, a New Indian Express report (cited by IndiaSpend) notes that, of the 183 districts with fewer than 100 isolation beds, 67 are recording COVID-19 cases.

COVID-19 marks a crisis point for global healthcare. As Vardhan touts the country’s progress thus far, it is important to not neglect the deficiencies in India’s public health infrastructure that were apparent before the crisis began and have been underscored by it since. A lockdown may have mitigated the impact thus far, but without ramping up efforts to supply vital necessities such as medical oxygen and ventilators – especially for those most sick – the consequences are likely to be catastrophic.