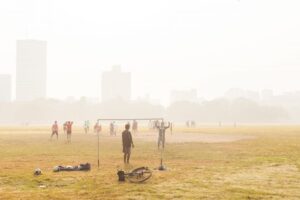 Multiple parts of India are gripped by a public health emergency owing to catastrophic levels of air pollution. To address the issue, a parliamentary standing committee will meet on December 5th. An earlier planned session saw multiple lawmakers neglecting to attend, warranting the need for greater scrutiny.

The Standing Committee on Urban Development will congregate a session of key stakeholders, including representatives of the Union Ministry of Health and Family Welfare, the Indian Council of Medical Research, urban local bodies, and landowing agencies, in order to deliberate on the long-term impacts of poor air quality on public health and how best to mitigate them.

A previous standing committee meeting on the same subject elicited much controversy and criticism. Of 29 MPs, only 25 showed up at the meeting scheduled for November 15th which was eventually called off.

“I need to enquire about it. I’m not aware about the matter at present,” Prakash Javdekar, Union Minister of Forest, Environment and Climate Change, commented at the time. “We are always very serious about pollution. I have emphasised that pollution is not a problem faced only by Delhi. I have ordered a joint action plan and the teams are working on it. Joint cooperation of all agencies is needed to fight pollution.”