You are here: Home / Social issues / Homelessness: An Indian crisis 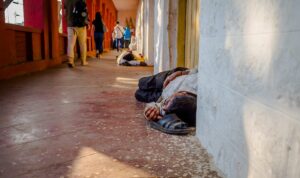 Homelessness is a crisis in India where, despite decades of development positioning the country as one of the world’s largest economies, wealth inequality is present in staggering proportions. In fact, India is the second most unequal country in the world. Its high rate of homelessness stands as a testament to this grim reality.

Approximately four million people in India are homeless. Furthermore, the 2011 census pegged the number of people residing in urban slums at 65 million. Approximately one in six Indians who reside in cities live in unsanitary slums. Although 44 Indians are lifted out of poverty every minute, millions continue to live below the poverty line – with manifold effects on development and wellbeing ranging from vulnerability to diseases to poor sanitation to higher levels of maternal and child mortality.

For India’s homeless, health vulnerabilities are far-reaching: the risk of violence, particularly sexual assault in the case of homeless women, often fatal exposure to the elements, and mental illness. To address the issue, the Supreme Court in 2012 directed that one homeless shelter for every 100,000 people should be built in every Indian city.

2013’s Shelters for the Urban Homeless initiative has reached 790 cities to provide basic amenities, legal aid and medical attention to the homeless. However, implementation issues and failure of authorities to spend funds have hampered its effect – to the extent that, in November 2017, it was reported that ninety percent of homeless people in India do not have access to sheltered accommodation.

India intends to provide housing for all by 2022, with the construction of twenty million accommodations within that timeframe. Yet experts have critiqued that initiative, with The Telegraph reporting “India hopes to reside in smart cities, but a report by the Housing and Land Rights Network has called the project faulty, arguing that the funding is discriminatory and lacks human rights indicators, especially for low-income groups.” Meanwhile, affordable housing remains out of reach for great swathes of the country.

By 2025, 42 percent of Indians will live in urban areas and eighteen million will be in need of low-income housing. Without their needs being addressed, the slum population and the number of those sleeping rough will increase. Homelessness is a reflection of a country dogged by inequality and addressing their needs, their suffering, and their vulnerabilities will be a vital component of the country’s social development – one which, for a fair society, will need to keep up with economic growth.