You are here: Home / Diet & Nutrition / The health crisis in India’s food 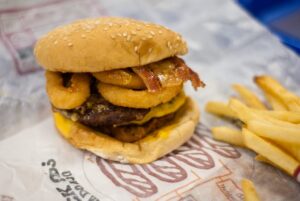 Food and drink sold in India is among the unhealthiest in the world, research suggests. Could this add to the already substantial crisis of obesity and noncommunicable diseases (NCDs)?

Levels of energy density (calories), saturated fat, total sugars, and sodium were assessed for the HSR ranking of each category of food. Countries were then given a mean ranking using the HSR system. India placed among the lowest-ranking countries and “ranked consistently in the least healthy third for all measures.”

The study’s findings are worrisome for India, which is facing a growing obesity epidemic. India is home to the third-largest number of obese people in the world. By 2025, India will be home to an estimated 65 million obese people, including seventeen million obese children. Rising obesity rates are associated with the country’s rapidly growing epidemic of NCDs, which account for 61 percent of deaths in the country. Conditions like cancer, heart disease, diabetes and hypertension are becoming ever-more prevalent and costly. Estimates suggest India could lose between US$4.58 trillion and US$6.2 trillion before 2030 due to NCDs, including mental health disorders.

That NCDs now dominate India’s disease burden in lieu of infectious diseases is indicative of an epidemiological transition. As the study notes, driving this – at least in part – is a transition in dietary habits.

“India…[is] experiencing a “nutrition transition”,” the study observes. “National nutrition surveys from the past few decades showing consumption patterns switching from traditional diets based upon fruits, vegetables, unprocessed cereals and legumes to diets that are increasingly dominated by highly processed packaged food and beverage products.” When compared to high-income countries, such foodstuffs are comparatively unhealthier, the study observes.

As such, the “data [highlights] the need for continuous monitoring and reporting of the healthiness of products across diverse countries. Nutrient profiling is an important tool that can help define and monitor policy actions to improve the healthfulness of products in the marketplace and reduce population risks of obesity and [NCD] risks.”

According to the study’s lead author Elizabeth Dunford, a research fellow at the George Institute of Global Health, “billions of people are now exposed to very unhealthy foods on a daily basis. The obesity crisis is just the first ripple of a tsunami of dietary ill health that is coming for us.” This is a warning India should take heed of.

The study, “A comparison of the healthiness of packaged foods and beverages from 12 countries using the Health Star Rating nutrient profiling system, 2013–2018”, can be accessed here.