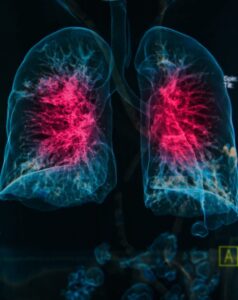 Chronic obstructive pulmonary disease (COPD) is a broad term used to describe a number of progressive lung diseases in which symptoms worsen over time. These include emphysema, chronic bronchitis, and refractory (non-reversible) asthma.

COPD is becoming ever more widespread in India. One of the key risk factors for developing many of the conditions covered under COPD is air pollution. The negative health impacts of air pollution on the lungs are well-documented, and India is notorious for being one of the most polluted countries in the world. With populations moving to urban areas, a rise in COPD cases seems inevitably.

The number of cases of COPD in India increased from 28.1 million in 1990 to 55.3 million in 2016, according to a study published in The Lancet. Of the disability-adjusted life-years (DALYs) due to COPD in India in 2016, 53.7 percent were attributable to air pollution. 25.4 percent could be ascribed to tobacco use and 16.5 percent to occupational risks.

The hallmark symptom linking all the diseases under the COPD umbrella term is increasing breathlessness.

The specific symptoms differ depending on the condition. An individual with asthma may have slightly differing (though similar) symptoms than an individual with emphysema. This is due to the different ways in which each condition affects the lungs.

In emphysema, the air sacs (alveoli) in the lungs are damaged, causing them to stretch. Over time this makes it harder to move air in and out of the lungs, causing breathing issues. Chronic bronchitis and refractory asthma differ in that they affect the bronchial airways, with bronchitis causing inflammation and asthma causing tightening and swelling. The linking feature of these conditions is that they are irreversible.

Common symptoms may be observed in each of these conditions. If symptoms persist for any length of time, it is advisable to seek medical attention. These may include the characteristic shortness of breath, long term coughing, wheezing, or a tightness in the chest.

Though the diseases under the COPD umbrella are incurable, with the correct diagnosis the symptoms can be managed. If symptoms such as those mentioned above are occurring over a long period of time, it is recommended to undergo a spirometry test to check for any of these conditions.

Risk factors for the disease can be reduced to avoid worsening the conditions, or, in some cases, preventing them entirely. Though factors such as air pollution may be unavoidable for some, quitting smoking is one of the best ways of avoiding lung damage, and could prevent COPD as well as other diseases such as lung cancer.