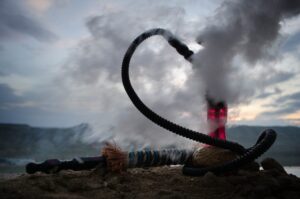 If you thought hookah is cool and safer than cigarettes, this could be bad news. Recent data suggests, just thirty minutes of hookah smoking could damage your heart.

Researchers at the University of California, Los Angeles (UCLA) found that a half-hour hookah smoking session significantly increases risk factors for cardiovascular disease. The study compared hookah users’ health before and after smoking the pipe and found that, after thirty minutes of smoking, users tended to display increased heart rate, elevated blood pressure, and arterial stiffness.

Hookah smoking is thought to have originated in India during the reign of the Mughal emperor Akbar. Its use being an ancient tradition, the hookah pipe is sometimes called ‘the pipe of India’.

A popular misconception is that hookah smoking is less dangerous than smoking cigarettes. Many incorrectly believe that filtering the smoke with water removes toxins, including nicotine. This is untrue. In fact, your average hookah bowl contains the same amount of nicotine as twenty cigarettes. Hookah smoke is also believed to contain six times more carbon monoxide and 46 times more tar. The use of charcoal in hookah smoking adds to the risk to health of the smoker.

Authorities in India have tried to crack down on hookah smoking, with regular raids on so-called ‘hookah bars’ – establishments where communal hookah smoking takes place. Some states, districts and cities have gone so far as to ban hookah bars. Maharashtra, for example, banned hookah bars at the statewide level and several cities and districts have imposed similar bans.

Hookah smoking continues nonetheless. Its growing popularity threatens to undermine the substantial progress India has made in tobacco control. This threatens in turn to massively boost rates of chronic diseases, adding yet another burden on India’s ailing public health system.