You are here: Home / Social issues / How to end a water shortage? A frog marriage. 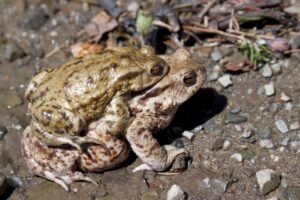 A marriage ceremony has been held for two frogs in Madhya Pradesh with a Minister of State in attendance, in a bid to end the state’s water shortage.

The wedding took place in a bid to “appease the rain gods” and put an end to the state’s drought woes. Lalita Yadav, Minister of State for Women and Child Development in MP, and other BJP officials allegedly organised the wedding of the two amphibians at a temple in Chhatarpur, as part of an ‘Ashad Utsav’ ceremony. A feast followed.

Yadav attended the nuptials on June 22. She is reported to have said after the ceremony, “We have prayed to god for rain in drought-hit Bundelkhand region and for the welfare of our farmers.”

India is currently in the midst of a water crisis, which is being blamed on changing monsoon patterns. Many states, including MP, are facing acute water shortages as a result.

Yadav has been criticised for her role at the frog marriage. Alok Chaturvedi, a senior Indian National Congress (INC) leader, called the ceremony “an attempt to divert people’s attention in the name of religion and old tradition.” Of Yadav, Chaturvedi added, “It would have been better if she had used this time and energy to solve people’s problems.”

“It is not superstition,” Yadav has asserted, “but a logical tradition which is necessary to balance the environment which is made up of five elements. The drought is a result of disturbance in the environment.”

The organiser said the ceremony was performed to appease the Hindu deity Indra Dev. They stated, “it’s an old belief that the wedding of frogs makes Indra Dev happy…we organised this wedding, requesting Indra Dev to hasten the arrival of monsoon in the city.”  The organiser pointed to a similar marriage ceremony which took place in Varanasi. There, plastic frogs were used in lieu of real amphibians.

Opposition to the ceremony has even led to a first information report (FIR) being filed against Yadav by animal rights activists. The ceremony has been deemed an act of cruelty by Naresh Kadyan of the Haryana-based organisation Scouts and Guides for Animals and Birds. He has called for the ‘forcibly wedded amphibians’ to be kept under police protection as evidence against the minister.