You are here: Home / Access to Healthcare / A child every two minutes, the cost of pneumonia

Pneumonia, a disease that is, for the most part, preventable through vaccination, kills a child aged under five every two minutes in India claim doctors from the Indian Academy of Pediatrics.

Around 3.6 million episodes of the disease occurred in children under five over the course of a year in India. This was revealed during the last large scale study of under five pneumonia, conducted in 2010. Separate studies have also shown that three in twenty children carry the streptococcus pneumoniae bacteria, one of the most common causes of the infection. 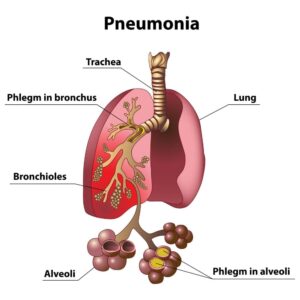 More recent records show that in 2015, 178,717 children below the age of five died due to pneumonia. The report, titled “Fighting for Breath”, by non-profit Save the Children, revealed that despite pneumonia antibiotics being available for as little as Rs 26, seven out of every 1000 live births die shortly after death due to complications from a pneumonia infection.

Despite pneumonia being mostly preventable through vaccines, as well as treated using antibiotics, the disease continues to claim lives in India. Pneumonia is particularly prevalent among those with weakened immune systems, the elderly, and children.

Though vaccination has brought down infection rates, the effects of vaccination campaigns remains limited until they are rolled out uniformly, and with higher rates of coverage. India suffers from a state by state approach to the vaccinations, compared to many countries which have seen greater success implementing a national vaccination policy.

As with many other diseases, including tuberculosis, pneumonia is increasingly showing resistance to first line antibiotics. “Increasingly bacteria are resistant to drugs like amoxicillin. The second line of treatment is expensive and costs a ton and worse there is no guarantee on the outcome,” said Dr C Satheesh, president, Indian Academy of Pediatrics, Chennai.

Doctors attest to the effectiveness of the pneumonia vaccine. As first line treatments are failing more often, leaving the more expensive second line treatments as the only option, vaccines are now taking centre stage in the fight against pneumonia.

Governments and charities must do more to ensure vaccines are both cheaply available and in adequate supply across India said a study co-authored by Kanchi Kamakoti Child Trust Hospital medical director Dr S Balasubramanian.

In 2016 the government announced the rollout of the HiB (Haemophilus influenzae type B) vaccine to ten states with high immunisation coverage. The vaccine addresses another cause of meningitis, pneumonia, and epiglottitis and has been shown to reduce incidence of these diseases.

The vaccine was brought out at an affordable cost, at Rs 150 per dose. However, the campaign avoided a rollout of the vaccine in Uttar Pradesh and Bihar, citing low immunisation coverage in these states. This has hampered India’s attempts at full immunisation by causing high levels of disparity between states.

India is slowly making progress towards higher immunisation coverage, with the pneumococcal conjugate vaccine being rolled out in 2017 across three states. This vaccination drive must be expanded to a national scale if India is to significantly reduce pneumonia related deaths.

A study has found that should India decide to expand the programme, the lives of around 90,000 children below the age of five could be saved every year. In addition to this, the vaccination rates would reduce pneumonia rates and in doing so reduce the need for treatment. Through this, a potential $1 billion USD (around Rs 6,470 crore) could be saved annually. An expansion of the vaccination could not only save lives, but save an underfunded healthcare system valuable resources that could be allocated elsewhere.