You are here: Home / Access to Healthcare / World Thalassemia Day

India is considered to be the world capital for thalassemia cases. Every year another 10,000 children are born with the condition. Despite this, as of World Thalassemia Day – May 8th – there is no policy at the national level aimed at preventing or controlling the spread of the disease. 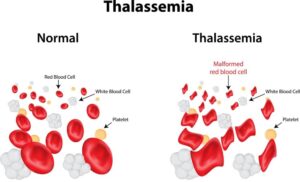 Thalassemia is a genetically inherited condition, passing from parent to child. This alone makes it a difficult disease to effectively control. The genes affected by the disease all relate to the proper formation of globin, part of the haemoglobin molecule of red blood cells. This aspect of the blood allows for the transport of oxygen around the body. The symptoms are comparable to anaemia.

Thalassemia can occur at varying severities due to the need for four genes (two inherited from each parent) to produce both alpha globin and beta globin. If only one gene is affected, a person may produce enough functional globin to be free of symptoms. Though this means the person may live a normal life, the situation is still problematic. Estimates currently place the number of thalassemia carriers in India at four million.

If a child is born to two people, each with a single missing or altered gene, the child may then have two dysfunctional globin genes and so develop more severe thalassemia.  A person with a single faulty gene may have a child that is perfectly healthy (if partnered with a person with no thalassemia related genes), as the potential is there to pass on their own corresponding healthy gene. Alternatively they may pass on the single gene and the child is again a carrier of the condition.

The symptoms vary depending on how many genes are faulty or missing, ranging from one to four. The most severe case, in which a child has inherited four genes — referred to as thalassemia major — usually results in a stillborn child or death shortly following the birth, as their blood will not have the capacity to transport oxygen.

Severity of the disease with three missing genes presents symptoms comparable to severe anaemia. A person may feel lethargic, have a reduced appetite and display a jaundiced appearance. As this is a condition present from birth, delayed growth and puberty is a common feature, osteoporosis is also a notable side effect.

With two genes missing these same symptoms may be present in a less severe form. With only one missing gene there may be no symptoms at all. Of the treatments available, blood transfusion is the most common, though this will need to be a sustained treatment across the person’s lifespan and can lead to iron overload and infection.

Shobha Tuli, president of the Federation of Indian Thalassemics, says there is a drastic need for India to recognise the condition at the national level, claiming “This will help in not just creating awareness about the disease but also ensure treatment for all and strategies to prevent its spread,”

Programmes are in place in countries such as Saudi Arabia and Pakistan that make carrier testing compulsory for relatives of those with the condition. Such a programme would also be of benefit to India, raising awareness of the disease as well as providing information to those that could potentially pass the disease onto their children.

The condition claims the lives of many sufferers before the age of 20 due to lack of treatment, often stemming from a lack of awareness of the condition. Dr. Chandru, director of the Centre for Health Ecologies and Technology CHET claims the recognition of the disease falls within the aims of the recently published National Health Policy:

“Carrier screening and prenatal testing through cost-effective multi-gene panel tests is within reach as a public health initiative and is consistent with the broad goals of the National Health Policy 2017,”