You are here: Home / News / Heatwaves in India continue to claim lives 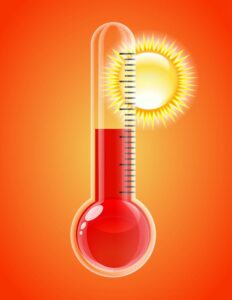 Two lives have been lost due to the current heatwave sweeping from north to central India. Since late March, temperatures have soared in the region to over 40 degrees celsius on a number of days. These conditions have caused death due to heatstroke, as well as non fatal instances of heat related illness.

Worryingly high temperatures of 44°C were reached in Akola in northern Maharashtra on April 1st. Nagpur hit 42°C on April 2nd, marking eleven consecutive days of temperatures above 40°C. In the beginning of April, a more typical temperature in the region would reach a peak of around 39°C.

The village of Bhira in the Raigad district of Maharashtra recorded the world’s second highest temperature on the 28th of March, with a high of 46.5C. With temperatures elevated significantly compared to the expected temperature at this time of year, the event has been classified as a heatwave.

This weather is not an abnormal phenomenon to the region, though is expected to occur later in the year says senior meteorologist from the Indian Institute of Tropical Meteorology Jeevanprakash Kulkarni in an interview with Firstpost. He mentions that this weather is usually expected in April, though has begun occurring in mid March, attributing the earlier shift to hotter temperatures to climate change.

Should India’s notoriously devastating summer heatwaves begin to occur earlier in the year, it  could cause a huge amount of damage to crops, as well as cause illness and possible death amongst the population. May 2016 saw record breaking heatwaves, as high as 51°C in the city of Phalodi in Rajasthan. This temperature was hot enough to destroy crop harvests, forcing many rural farmers to flee to the cities. The extreme heat even caused tarmac to melt on some roads.

In May 2015,  heatwaves claimed the lives of over 1700 across India. The majority of these deaths occurred over the space of a week, putting severe strain on hospitals. It is this scenario that is most concerning. With such a high number of fatalities, heat could could become a public health crisis — especially if heatwaves become not only more common, but also  occur more sporadically throughout the year.

The heatwaves are becoming more severe, with the May 2015 example named as fifth most deadly heatwave in the global database and the second most deadly to have occurred in India. Equally concerning, the number of heat waves in the decade leading up to 2010 showed nearly double the rate compared to previous decades according to the Meteorological Office. This may mean a deadly combination of more severe events that occur more often.