Sickle cell disease (SCD) in endemic in Chhattisgarh, a new survey reveals. Carried out between 2008 and 2016 by the State Health Resource Centre in Raipur, the survey found that ten percent of children born in Chhattisgarh are born with SCD, which affects a tenth of the state’s 27.9 million-strong population. Especially worrisome is the disproportionate effect of SCD on the state’s tribal population. 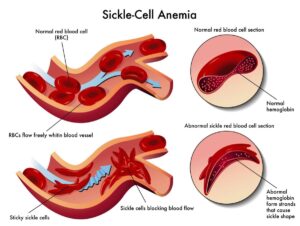 The Gond tribe of Raipur show a prevalence of the disease of around 20 percent. Similar percentages are found within the Kurmi and Sahu castes in the region, ranging between 20 and 22 percent. Sickle cell disease is also present at high levels in Rajasthan and Madhya Pradesh.

The abnormal protein inherited in sickle cell anaemia forms a sickle shape, instead of the standard disk shape. This is what can cause potential complications leading to fatality. Disk shaped blood cells are flexible, capable of navigating the varying diameters of blood vessels without issue. Sickle cells lack this flexibility, this causes an increased chance of blood vessel clogging.

SCD does present one surprising positive aspect. The cells rupture when invaded by the malaria parasite, due to the weakened state of the red blood cells. This cut shorts the replication cycle of the parasite and thus protects the human host against malarial infection. The protective aspect of the disease against malaria means it is often more common in populations where malaria is also widespread. As a consequence, the disease is prevalent in many areas of Africa and south Asia, including India.

That the disease can be lethal should not be overlooked, however, despite the protection it provides against malaria.  If SCD is left untreated during childhood, it can kill; if treated, the best case scenario is a shortened lifespan of potentially twenty years. Doctors of the Sickle Cell Organization of India say SCD claims 10,000 children’s lives in Chhattisgarh alone every year.

Despite the prevalence, and severity of the disease, criticisms are abundant regarding the amount of help available in the state. The Sickle Cell Institute was set up in 2013, and has  180 job positions within it, but ministers note that 154 of the positions remain vacant. Most of the filled positions are reportedly administrative, rather than medical personnel.

Efforts to curb the effects of sickle cell disease have only recently been established, though these efforts towards treatment seem to largely be unproductive. Dr Dalla, former Chairman of state unit of Indian Red Cross Society explains the situation:

“The efforts so far has remained restricted to research and academic pursuit rather than countering the problem at                the grassroots level, beginning from the primary health centre onward to district hospitals”