You are here: Home / Featured / Down syndrome awareness in India

Testimonies from Indian doctors explain that people with Down’s syndrome are perfectly capable of integrating into society, as well as holding successful jobs, citing examples from other nations. A key matter holding down syndrome sufferers back however, is public opinion. India has held a number of events to raise the profile of the disease for Down syndrome awareness day on the 21st of March. 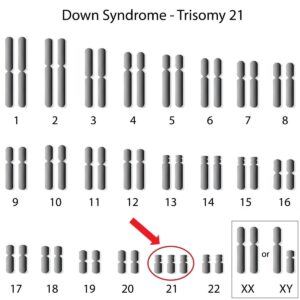 Down’s syndrome occurs when a child is born with an extra chromosome 21, referred to scientifically as trisomy 21. This is not a hereditary trait and can occur despite both parents being genetically normal. Symptomatically Down syndrome manifests as craniofacial abnormalities as well as developmental problems at varying levels. Due to an extra copy of the APP gene (coding for the APP protein, a precursor to amyloid protein, thought to be a cause of Alzheimer’s) on chromosome 21. Down syndrome individuals are more likely to develop Alzheimer’s disease due to higher amyloid burden. It is also thought that the developmental problems may also be partly because altered levels of the APP gene.

Despite typically requiring more assistance through life than a non Down syndrome individual, Down syndrome sufferers may lead perfectly normal lives and attend school and work as effectively as anyone else.

Many doctors believe that treating Down syndrome sufferers as a burden, and assigning them menial tasks holds them back from integrating into society. Dr Shaji Thomas John, chairman of the Down’s Syndrome Trust says that several centres across India train the mentally handicapped to make soap or other simple tasks, and that this is not doing enough for them.

Many disabled people, including those with Down syndrome, are employable. Many are aware of the fact that they are employable, in roles doing more than simple labour. The Hindu mentions a recent example from France in which Melanie Segard, a 21-year-old woman with Down syndrome presented the weather on France 2, a French national television channel. There are numerous highly successful individuals with Down syndrome, succeeding in academia, business, art and sports.

Down syndrome awareness is key to ending stigmatisation of the disease, to this end there have been a number of events held across India. In Chandigarh a ceremony was held bringing together Down syndrome charities, the Department of Psychiatry GMCH, GRIID Government Rehabilitation Institute for Intellectual Disabilities, Chandigarh Down Syndrome Society, as well as a number of children with Down syndrome and their parents. An announcement was made to make Chandigarh a Down’s syndrome friendly city.

In Kolkata, Victor Banarjee, the Bitter Moon actor,  travelled in a decorated tram with Down syndrome children accompanied by their families and teachers. Banarjee, a goodwill ambassador of the initiative said “even if ten people remember the cause that will help. Apathy is a mental disorder, apathy is a disease”.

Down syndrome in India has also gained media attention abroad, with a documentary appearing in the Maryland International film festival. Indian filmmaker Onir’s documentary, “Raising the Bar” following the stories of six Down syndrome individuals at the World Down Syndrome Congress in Chennai has been selected for awards in the festival.

Justice Kant, an attendee at the Chandigarh ceremony notes that Down syndrome rates are measured between 1 in 1000 and 1 in 1100 worldwide. As India has a high birth rate, it will naturally have more people born with Down syndrome. With this in mind, raising down syndrome awareness  and ending stigma is a priority, allowing for those affected to take up meaningful roles in society and fulfill their potential.