The multinational panel was convened in September last year by Ban Ki-moon, the United Nations Secretary-General, as a response to global inequality of access to medicines, with the stated objective:

“to review and assess proposals and recommend solutions for remedying the  policy incoherence between the justifiable rights of inventors, international human rights law, trade rules and public health in the context of health technologies.”


The publication of the report immediately preceded the release of an index of 188 countries based on their performance in relation to SDG 3, which found that the less economically developed world – especially sub-Saharan African countries –  substantially behind on meeting key health targets 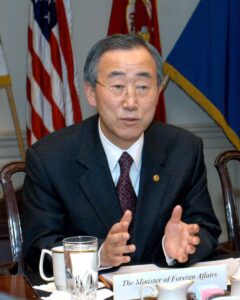 In a letter to the Secretary General, the HLP’s co-chairs – former President of the Swiss Confederation, Ruth Dreifuss, and former President of Botswana, Festus Mogae – described the outcome as ‘a consensus report’. Describing access to medicines and health technologies as ‘a matter of concern for rich and poor countries alike’, Dreifuss and Mogae called the panel ‘unanimous on the need to act, and to act now’.

The report included several recommendations. These were summarised by Intellectual Property Watch as follows:

“The panel calls for countries to embrace the policy space available in the World Trade Organization intellectual property rules, and invest more in health. It also calls for negotiation of a binding international treaty on research and development, delinking prices from R&D costs, greater transparency in drug pricing, public health impact assessments in free trade agreements, and encouragement to better use international legal tools available to countries to ensure affordable medical products.”

The report has elicited divergent responses internationally, from governments, non-profit organisations, the media, and the private sector alike.

Reporting the reactions of the biopharmaceutical industry, the International Federation of Pharmaceutical Manufacturers and Associations (IFPMA) was largely critical of the report, stating that stating that “it does not provide a sound basis for meaningful progress.” Eduardo Pisani, the IFPMA Director General, commented:

“Access to medicines is at the center of everything the innovative  biopharmaceutical industry does. The report fails to address the genuine

every day. The HLP took a very narrow focus and ignored the full range of  variables influencing access to medicines. We need to build on what works,  we need inclusive solutions that bring the global health community as a whole  closer to patients, addressing what matters to them.”

A statement from the Biotechnology Innovation Organisation (BIO) responded similarly unfavourable to the report, stating that it:

“ignores the real issues that impact or delay delivery of innovative treatments and cures throughout the developing world, while focusing on policy  recommendations in the one area – intellectual property – that would actually undermine ongoing research and development by hundreds of companies, universities and researchers.”

Other entities, in particular non-profit organisations, responded more favourably to the report. Médecins Sans Frontiéres (Doctors Without Borders; MSF) expressed its support, urging: “governments and industry to rapidly implement the recommendations  of the High-Level Panel’s report…Governments must go  beyond the challenge of drug-resistant infections and make bold, broad reforms in the way medical research and development is conducted, so we can stop failing humanity on such a basic need.”

Stating that they “commend the United Nations…and welcome the report”, Health Action International similarly asked  “all government leaders to act on the Panel’s recommendations and implement ambitious policies that help ensure that access to medicines becomes a reality for everyone.”

Within India, responses were likewise polarised.

FirstPost took a positive outlook, calling the report “a shot in the arm for activists and governments struggling to deliver life-saving drugs to the dying millions.”

However, economist Amir Ullah Khan, in an opinion piece for Business Line, opined that “public health is best left to markets” and proclaimed that “game-changing inventions taken out of entrepreneurs’ hands; slower innovation in healthcare technology and fewer ground-breaking treatments for patients worldwide” were potential outcomes of the HLP’s recommendations.

Citing advances in medicine such as sofosbuvir, a drug marketed since 2013 to treat hepatitis C, Khan advocated cooperation between the private sector and the UN, encouraging the latter to “acknowledge the power of markets to achieve social goals” and “embrace the market-based system of drug development, rather than try to replace it.”

The full report of the High Level Panel and related documents can be accessed here.