You are here: Home / Featured / #Rotavirus vaccine would save 50,000 Indian children a year – maybe adults too

India has delayed introducing an anti-diarrhoea vaccine used in much of the industrialised world and in many developing countries. The delay is largely because India is developing its own version of the vaccine but, according to the WHO, each year of delay costs the lives of 50,000 Indian children. One in 242 Indian children will die from this disease before the age of five.

Now, this piece from Reuters shows something unexpected: according to the US Centers for Disease Control, rotavirus vaccines do not simply prevent diarrhoea in young children (they seem to prevent about 80 percent of cases in the US); they stop illness in the adults and older children who live around infected children (about half of adult cases were prevented although hardly any adults were immunised). These findings are about the US where the major concern is reducing hospital stays and they may not be applicable to India. If they are, though, the impact will be much higher: the big concern in the US is additional hospital stays; in India, because treatment is less accessible and sometimes less effective,  thousands of children and adults die — mostly in rural areas. 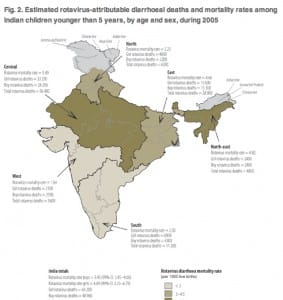