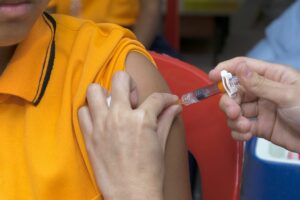 Routine childhood vaccination has been found to have links to improved schooling among adults in India amongst a wealth of other benefits, according to a study assessing educational attainment.

The study published in the Social Science & Medicine journal found that routine immunisation in childhood could be linked to improved educational outcomes among adults in India. This research adds to an existing body of literature on the long-term non-health benefits of vaccines such as increased economic productivity, improved cognition, and growth among children.

Researchers analysed levels of schooling attainment in years among adults born during or after the implementation of India’s Universal Immunization Programme (UIP). The UIP was launched in 1985 and initially provided free vaccines against measles, poliomyelitis, tuberculosis, hepatitis B, diphtheria, pertussis and tetanus. The number of diseases covered under the UIP has since been expanded. The Modi administration has sought to scale up immunisation efforts through initiatives such as Mission Indradhanush which aims to cover all children up to two years of age and pregnant women.

The research compared data of adults born during or after the UIP with adults born before the implementation. As part of this, district-level data from the rollout of India’s UIP between 1985 and 1990 was matched to schooling data from the 2015-16 National Family Health Survey.

Specifically, the study found that India’s UIP was associated with 0.2-0.3 additional schooling grades among adults. Further to this, the link between UIP implementation and educational attainment was significant among women, unmarried women, members of households in rural and urban areas, general caste and other backward classes, and individuals in the top two wealth quintiles.

“We compared schooling attainment of individuals who were born after the introduction of UIP with that of those who were similar, i.e., they lived in the same household or community, but were born just before the UIP,” said Arindam Nandi, one of the authors of the study and senior fellow at the Center for Disease Dynamics, Economics & Policy.

In an era when vaccines have made headlines globally as part of exit strategies during the COVID-19, this understanding of the links between routine childhood vaccination and improved outcomes across many aspects of life not related to health helps build on an area where little evidence previously existed. This data gap is especially true of low- and middle-income countries.

“This study is an important addition to a small but growing literature on the broader cognitive and schooling benefits of routine childhood vaccines in low and middle-income countries,” added Nandi. “The findings reinforce the need for universal vaccination coverage among children.”

Moving forward, a new online database – the Value of Immunization Compendium Evidence (VoICE), created and maintained by the International Vaccine Access Center at the Johns Hopkins University’s Bloomberg School of Public Health – will track research on the broader benefits of vaccines on health, educational, economic, and equity outcomes worldwide. Collecting such data has the potential to be a valuable implement in highlighting the far-reaching benefits of vaccines and communicating their manifold benefits, in order to encourage parents to inoculate their children.