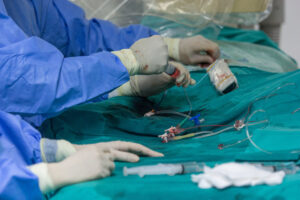 There may be new hope for heart diseases patients with severe blockages who cannot be treated with the standard angioplasty procedure. The new hope is a procedure known as coronary shockwave lithotripsy balloon, which has been performed for the first time in a Kerala hospital.

Mar Augustine Kandathil Memorial Lisie Hospital, near the Kaloor region of Kochi, saw the treatment performed on a 76-year-old. Coronary shockwave lithotripsy balloon treats blockage in the heart as a consequence of severe calcification following bypass surgery occurring twenty years before or more. The individual treated at the Lisie Hospital had undergone bypass surgery almost 29 years ago and through the procedure, ninety percent of the block was removed.

The procedure is performed by inserting a ‘balloon’ into the patient’s coronary arteries to deliver sonic pressure pulses via emitters in order to break up the calcium. Cardiologists were then able to insert a stent once the blockage had been broken up. “Such blocks until now were opened with high pressure balloons or by rotablation procedure, which won’t work for deep and extensive calcified arteries,” explained Dr Jabir A, who was involved in the procedure. “This therapy has made complex angioplasty much safer and quicker.”

Heart disease is on the rise in India, with a fifty percent increase in cases between 1990 and 2016. In the latter year, heart disease was India’s leading killer, being responsible for 28.1 percent of deaths that year.

Of the value of coronary shockwave lithotripsy balloon as a treatment, cardiologist and head of the team that conducted the operation Dr Rony Mathew said that it “would be extremely useful for those suffering from advanced form of coronary artery disease, having angina or heart attack in which the blockages become very hard due to deposit of calcium. This happens in fifteen to twenty percent of patients undergoing angioplasty and stenting, especially those who are old, diabetic, having chronic kidney disease or who had undergone bypass surgery.”