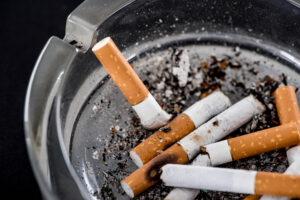 The imposition of an increased tobacco tax has seen companies take a hit in the wake of the 2020-21 Union Budget.

Proposals made included raising the national calamity contingent duty (NCCD) on various tobacco products, though excluding bidis. For smoking material for cigarettes and pipes, an increase has been proposed to sixty percent compared to 45 percent at present. The NCCD is being raised to 25 percent from ten percent for other forms of smoking tobacco, as well as chewing tobacco.

As reported in YourStory, “analysts estimate that the price of cigarettes will increase by five to six percent across small and large sticks. Even if cigarette-makers were to absorb a share of the price hike, consumers would still have to shell out 3.5 to four percent higher on packs.

Tobacco firms are expected to take a hit from the decision. Manufacturers including Godfrey Phillips India, the Indian Tobacco Company (ITC) and VST Industries saw their stocks dip in the wake of the announcement. On the Bombay Stock Exchange (BSE), the ITC saw its shares decline by 5.9 percent; VST Industries saw a 1.48 percent decrease; and Godfrey Phillips saw their shares fall by 0.48 percent. ITC lost its place on the list of India’s ten most-valued companies following the announcement.

The use of tobacco is a major public health scourge in India, although rates are declining. 8.1 million fewer Indians used tobacco in the 2016-17 period, compared to 2010. This followed a jump in the number of Indian smokers between 1998 and 2015, from 79 million to 108 million. However, even as fewer Indians use the substance, tobacco use continues to exact a toll on the country’s health and its coffers. As reported by Health Issues India on World No Tobacco Day last year

“At present, fourteen percent of adults use smoking tobacco. 25.9 percent of adults use smokeless tobacco. Tobacco use is the fourth leading cause of death in the country. One million Indians lose their lives every year to the consequences of smoking. The exchequer also pays a tobacco toll. Bidis alone cost the country’s coffers Rs 800 billion, while the total costs of tobacco is estimated at 1.04 trillion. India’s burden of lung disease ranks among the highest in the world and it also shoulders a significant burden of other conditions related to tobacco use, including hypertension, heart disease, and head and neck cancers.”

In the case of cancer, the recent World Health Organization (WHO) World Cancer Report identified tobacco as a population attributable factor (PAF) in seventeen percent of the cancer deaths observed in India in 2017.

How India has been dealing with its tobacco menace

The Government of India has not shied away from addressing tobacco use in recent years. Perhaps most notably, it has imposed stringent regulations concerning the packaging of tobacco products. Such packaging is mandated to contain pictorial health warnings covering 85 percent of the principal display area; this applies to cigarettes, bidis, and chewing tobacco. In addition, text warnings are required such as ‘tobacco causes painful death’ and a toll-free ‘quitline’ number.

Union Health Minister Dr Harsh Vardhan has been a stringent opponent of the tobacco industry during his career. He has advocated for increased taxes on tobacco products, led tobacco awareness programmes in his native Delhi, and was an early architect of the Government’s push for more prominent health warnings.

These steps notwithstanding, experts have previously urged the Government to go further. Upping the tobacco tax was called for by experts last year. At the time, health economist Rijo John argued that “the total effective tax burden currently for tobacco products in India is only about 49 percent for cigarettes, 22 percent for bidis and sixty percent for smokeless tobacco. This data reveals a far different picture from what the tobacco industry is portraying in their demand for lower taxes.

“As the taxes have not been increased on any of the tobacco products for more than two years, all tobacco products have become more affordable during this time. Hence, increasing taxes on tobacco products are warranted not only for regulating its consumption, but also for raising more tax revenue.”

A boon for public health – or smugglers?

The Tobacco Institute of India has spoken out against the proposed new tobacco tax increases. The organisation, “a representative body of farmers, manufacturers, exporters and ancillaries of the cigarettes’ segment of the tobacco industry in India, whose members account for more than 98 percent of the country’s domestic sales of duty paid cigarettes”, has suggested that the changes could serve only to enrich illicit providers of tobacco products.

As such, the Institute said “we appeal to the Finance Minister to reconsider the proposal and withdraw the NCCD levy.”

It was reported last year by the Tobacco Institute of India, in research conducted with Euromonitor, that the illegal tobacco trade in India had grown to the extent that the country now ranks as fourth-largest illegal cigarette market in the world – as well as the fastest-growing. “High taxation on cigarettes over the years, particularly between 2012-13 and 2017-18, has impacted the legal cigarette industry and provided a huge fillip to the illegal cigarette trade in the country,” the Institute claimed at the time. “Incidence of taxes on cigarettes after accounting for the GST [Goods and Services Tax] cess increase has trebled between 2012-13 and 2017-18.”

The claim that increasing tobacco taxes is often cited by the tobacco industry, arguing that the subsequent increase in smuggling rates will offset any benefits to public health as people will continue to smoke via illicit channels. However, an article published in The British Medical Journal – citing evidence from Hong Kong – noted that “higher tobacco tax does effectively reduce total tobacco consumption.”

The WHO reports that

“Evidence from countries of all income levels shows that price increases on cigarettes are highly effective in reducing demand. Higher taxes induce some smokers to quit and prevent others individuals from starting. They also reduce the number of ex-users who return to tobacco and reduce consumption among continuing users. On average, a price rise of ten percent on a pack of cigarettes would be expected to reduce demand for cigarettes by about four percent in high-income countries and by about eight percent in low- and middle-income countries, where lower incomes tend to make people more responsive to price changes. Children and adolescents are more responsive to price rises than older adults, so this intervention would have a significant impact on them.”

Of smuggling rates increasing in-line with higher tobacco tax levels, the WHO says “the determinants of smuggling are much more than price alone. Using standard indicators of corruption levels based on Transparency International’s Index of Countries, the World Bank concluded that, with notable exceptions, the level of tobacco smuggling tends to rise in line with the degree of corruption in a country.”

The debate over the effectiveness of higher levels of tobacco tax is unlikely to dissipate in the near future. What is clear is that strategies to further reduce Indians’ tobacco intake is of vital importance for the benefit of public health. Higher levels of tobacco tax could well be one avenue towards achieving this aim. With new proposals from the Government to do the same, time will tell if the tobacco tax will manifest in the benefits the public health community hope for or the smuggling epidemic the tobacco industry is cautioning against.