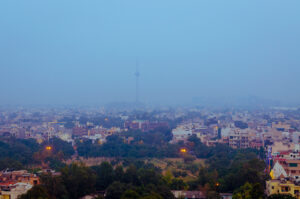 According to the centrally-run System of Air Quality and Weather Forecasting and Research (SAFAR), the AQI score for Delhi stood at 391 yesterday. An AQI score between nought and fifty is considered ‘safe’; above that, 51 to 100 is considered ‘satisfactory’ and 101 to 200 ‘moderate’. When the AQI reading crosses the 200 mark, it becomes ‘poor’; above 300, it is ‘very poor’; and an AQI score of 400 to 500 is ‘severe’. As such, the AQI reading of 392 positioned Delhi firmly in the ‘very poor’ category on Wednesday and precariously close to the ‘severe’ mark.

In advice to the citizenry concerning the capital’s pollution emergency, SAFAR said “people are advised to take more breaks and do less intense activities. It is advisable for the asthmatics to keep medicines ready if symptoms of coughing or shortness of breath occur. Heart patients, see the doctor, if [you] get palpitations, shortness of breath, or unusual fatigue.”

With Legislative Assembly elections impending, many are debating the extent to which the capital’s pollution emergency will figure in the minds of the electorate as they cast their votes. In a recent report, IndiaSpend said that the dozen Delhiites it spoke with “said they are less likely to vote on the issue of air pollution. Water, electricity, roads, sanitation and houses emerged as key issues on which they will cast their vote.”

On the other hand, citizens’ groups cited in the same story such as the United Residents Joint Action (URJA) are holding candidates for the Legislative Assembly to account on the issue of pollution. Last year, URJA released a ‘green manifesto’ calling for pollution to be reduced by 65 percent by 2025; accessible public transport for at least eighty percent of the Delhi population; and decongestion initiatives, among other environmental issues such as water loss.

“A lot of these targets and vision are already part of our current policy programmes, but the challenge lies in real-time implementation of these targets,” URJA president Atul Goyal commented at the time. “URJA expects the political parties and candidates running in the 2020 Delhi elections to align their manifestos with the ten demands and match their actions to it.”

Pollution can be linked to a plethora of health conditions according to numerous pieces of research, including: chronic obstructive pulmonary disease, lung cancer, heart disease, diabetes, dementia, and mental health issues. India’s pollution emergency is responsible for the loss of two million lives in the country every year. Even a short span of time spent in a heavily polluted city is damaging to one’s health.

With this in mind, the ramifications for those living in environments such as Delhi for prolonged periods of time are dire. As such, it is clear that voters neglect holding their public officials to account on the issue of pollution at their own peril – and regardless of whether it is politically advantageous to do so, policymakers must address the pollution emergency as the humanitarian disaster it patently is.