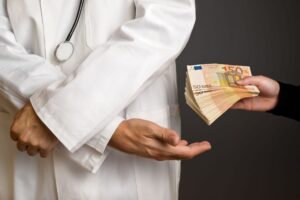 In the implementation of the Centre’s flagship health insurance scheme Ayushman Bharat, fraud has been a major issue. The number of hospitals flagged for fraudulent and corrupt practices exceeds 300, the Government informed the Rajya Sabha earlier this week.

“More than 338 hospitals have been served show-cause notice/suspended/de-empanelled in different states and penalties of over Rs 3 crore have been levied on errant hospitals so far,” Minister of State for Health Ashwini Choubey informed lawmakers. In addition to the hospitals that have been penalised, 3,785 common service centres and ‘Pradhan Mantri Arogya Mitra’ IDs have been deactivated in 21 states.

Elaborating on examples of Ayushman Bharat fraud detected by the states, Choubey said “some instances of creation of fake cards and submission of manipulated or forged claims under Ayushman Bharat–Pradhan Mantri Jan Arogya Yojana (AB-PMJAY) have come to the notice.”

To counteract Ayushman Bharat fraud, the Government has established the National Anti-Fraud Network and outlined steps for state governments and authorities to detect instances of corruption, including a provision that Ayushman Bharat admissions must be vetted and authorised by State Health Agencies. “A close watch is maintained on wrongful enrollments of the beneficiary,” Choubey told Rajya Sabha MPs.

Packages with a high risk of over-utilisation and, therefore, fraud are afforded especial scrutiny, Choubey said, being either exclusively the domain of public hospitals empanelled under the scheme or requiring pre-authorisation, for which documentation is a prerequisite for the remuneration of claims made under the scheme. In addition, Choubey said state anti-fraud units and and medical auditors conduct audits, both deliberately and at random, to identify instances of wrongdoing. In addition, the Union Government has announced plans to publicly name and shame erring hospitals and blacklist them from participation in other state-run health initiatives.

In November, it was reported that almost 3,000 suspicious cases of suspected Ayushman Bharat fraud had come under the radar of the Government, running up a cost collectively of Rs 4.5 crore against Rs 2.29 crore recouped by the National Health Authority at the time. Vigilance against Ayushman Bharat fraud is vital if the scheme is to reach those it is intended to benefit – and not to be exploited by unscrupulous vendors for fiscal gain.