You are here: Home / Environmental health / Eye health at risk in Delhi thanks to pollution 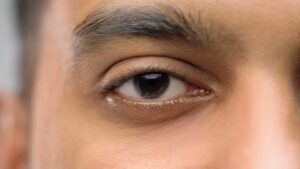 Pollution is associated with a plethora of detrimental health effects – and eye health is among the facets of wellbeing which take a hit when pollution levels are high.

Delhi is currently grappling with a major pollution crisis, with air quality levels plummeting to the extent that a public health emergency was declared in the national capital at the beginning of November by the Environment (Pollution Prevention and Control) Authority (EPCA). The risks to health from pollution are far-reaching, not just limited to lung disease. Exposure to air pollution has been linked to conditions such as heart disease, dementia, diabetes, stroke, and mental health disorders.

The risk to eye health is yet another health complication Delhiites are vulnerable to amidst the dire conditions. Opthalamologists in the capital have reported an uptick in the number of patients complaining of eye problems. “We are observing an increase in [the] number of patients coming to us with complaints of redness, itching, watering in the eyes,” commented ophthalmologist Dr Ikeda Lal of the Delhi Eye Centre and Sir Ganga Ram Hospital. “Patients with pre-existing dry eyes are experiencing exacerbation due to high pollution.”

Dry eye disease, as previously reported in Health Issues India, is far from a trivial condition. In its severest forms, it can result in blindness. Concerningly, the condition is on the rise throughout India’s cities. By 2030, the condition is anticipated to affect roughly fifty percent of urban denizens in the country. Pollution is among the factors potentially contributing to this upsurge.

The risk of dry eye disease is not the only threat to eye health exacerbated by the pollution problem. Allergies can also be inflamed by the conditions, with All India Institute of Medical Sciences’s Professor of Ophthalmology Rajesh Sinha warning that “increasing pollution…causing discomfort even in normal eyes and aggravates the eye complaints in eyes that are prone to dryness and allergies. If care is not taken immediately, some of these eyes can have reduced vision due to this problem as well.”

Delhi is far from the only city in India to see pollution impair eye health. In one hospital in Bengaluru, as an example, rising rates of the serious eye condition keratoconus were linked to pollution. Cases in just that one facility jumped by twenty percent between the 2017-18 and 2018-19 periods. With India being home to seven of the world’s ten most polluted cities, the risk to eye health is very real and requires vigilance by both patients and practitioners.

Even in a country where more than sixty million people are affected by some form of visual impairment, many Indians forego an eye health check-up. Particularly, though not only, in heavily polluted metros, vigilance against ocular symptoms is necessary – especially for those with pre-existing eye problems – and consulting an eye doctor is necessary to prevent further damage as well as following their advice to protect the eyes.