You are here: Home / Access to Healthcare / A digital health blueprint for universal healthcare 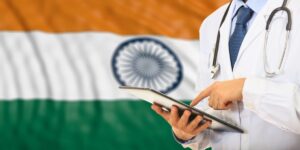 “[The] Government of India is committed to ensuring high quality healthcare, accessible to all upto the last mile,” said Vardhan, Union Minister of Health and Family Welfare and Science and Technology. “The digital health interventions are accelerating this transformation and have a huge potential for supporting universal healthcare.”

As such, he said “the Ministry of Health has initiated efforts in the direction of a comprehensive, nationwide integrated e-health system under the National Digital Health Blueprint (NDHB)” and urged stakeholders to ensure the NDHB’s timely implementation. “The need of the hour is to create an ecosystem which can integrate the existing disparate health information systems and show clear path for upcoming programmes,” Vardhan added. “There is a need to ensure convergence across these IT systems to monitor and provide health services in a robust and efficient manner.”

Vardhan announced the NDHB earlier this year, issuing a draft report to which he said “there was [an] overwhelming response from academia, private companies, many countries as well as researchers” in a tweet. “This helped us to further strengthen this report and turn it into a perfect vision document.”

The objective of the NDHB is to leverage digital technology to effect improvements in India’s health system and move towards universal health coverage. In effect, the blueprint serves to synergise existing applications in healthcare technology and data, “[defining] clear timelines, targets and the resources required for this digital convergence of healthcare programmes in India” per a government press release.

The NDHB comes in line with the Centre’s Digital India programme, launched in 2015, with the goal of empowering Indians by expanding access to digital technology to support government-run programmes. A plethora of digital innovations have been launched by the Centre such as Aadhaar, a biometric identification system once lauded by former World Bank Chief Economist Paul Romer as “the most sophisticated I.D. programme in the world.”

After the NDHB’s announcement, a committee was formulated chaired by J. Satyanarayana to devise a framework for implementation. The committee furnished a report to Vardhan earlier this week. Vardhan praised the work of the Committee, stating “they have done exceptional work in developing this blueprint…now all stakeholders have to work towards implementing the NDHB in a time-bound manner.”

“After Cabinet approval,” he added, “[the NDHB] shall pave the way for India to take leadership in providing a holistic approach for digital healthcare interventions.”