You are here: Home / Featured Story / Sexual harassment in India: A crisis 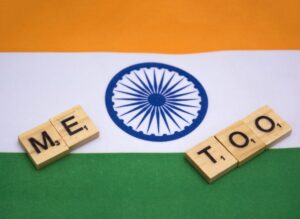 Sexual harassment is frequently overlooked in India, even in the age of the MeToo movement which saw survivors share their stories and led to the downfall of numerous public figures worldwide, in politics, business, the entertainment industry, and beyond.

India was no exception to this trend, with women from all walks of life sharing their stories of sexual harassment. Nonetheless, the practice remains a depressingly common phenomenon in India, where a woman is sexually harassed every twelve minutes.

“[Fewer than] one percent of sexual harassment cases [in shelter homes] come out,” reported Lek Ladki Abhiyan, a movement focused on the issues facing Maharashtra’s girls and women. “This is because such shelters are operated by party workers. We have repeatedly approached the government to introduce an SOP [standard operating procedure] but there is no positive reply.”

“The internal committees that are set up both in government and private sectors do not have the teeth to act on complaints of sexual harassment,” said Maharashtra State Commission for Women chairperson Vijaya Rahatkar. “Members of such committees are not aware of the law and are afraid of taking any action against seniors. This was one of the reasons few people coming forward to lodge complaints. We have asked the government to make it compulsory for the staff of corporate sector to undergo online training on sexual harassment to make them aware of their rights.”

The NCRB data highlights that sexual harassment is a risk in all facets of life: in shelter homes, in the workplace, in the home, on public transport. As a case in point, this year, BSE 100 companies witnessed a fourteen percent increase in sexual harassment cases.

In some respects, this came as good news. “Women are more prompt these days to report any case of sexual misconduct and it is the responsibility of organisations to take speedy action,” said Suresh Tripathi, vice president of human resources management at Tata Steel. “Prompt action by organisations will act as a deterrent for others, and it will encourage women to come out and report.” As such, Tripathi adds, “increased reporting is good to start with as it means there is more awareness.”

An increase in sexual harassment cases being reported is a trend India has witnessed for a number of years. Reported cases increased by 54 percent between 2014 and 2017. Nonetheless, there is a reporting gap. In the case of sexual assault, it was reported last year that 99 percent of cases go unreported. Police in some cities do not even register reports of sexual harassment, Reuters reported in 2016. Even in the wake of the MeToo movement, fears have been expressed of it losing momentum against a backdrop of high-profile cases being allegedly mishandled, continued underreporting, and inadequacies in the country’s sexual harassment laws which make it harder for women to come forward.

One major gap surrounding the discourse about sexual harassment in India is the stories of women in rural areas. As a report in France24 noted, “while the movement has had an impact in India’s largest cities, the notions of consent and sexual harassment remain alien concepts in many rural areas.” The lives of women in these areas, the Observer Research Foundation noted, “are embedded in the long standing misogyny and deep rooted patriarchy that exists in India today. And since their education level is low, they have come to believe that these sexual abuses and harassments are normal.”

This is despite the fact that it was the story of a woman hailing from rural India who led to the formulation of the Vishaka Guidelines. A Rajasthan native, Bhanwari Devi had stood up against a planned child marriage of a nine-month-old girl. Her stance angered higher-caste men in the village, where she worked on behalf of the Women’s Development Programme going door to door educating about social issues affecting women. In an act of brutal reprisal against her opposition to the wedding, Devi’s husband was beaten unconscious before she was gang-raped by five men.

Her attackers were acquitted at trial, in a roundly criticised decision, but her case instigated a public interest litigation by women’s rights groups including Vishaka, from which the Guidelines get their name. “The state authorities had refused to help her, saying as her employer, they were not responsible since she was assaulted in her fields,” asserted women’s rights activist Professor Renuka Pamecha. “We said the government must take responsibility since the attack on her was because of her work.”

With the argument that the attack on Devi occurred as part of her professional duties, the Supreme Court ultimately ruled that it was incumbent upon employers to protect female employees from harassment and violence: “It shall be the duty of the employer or other responsible persons in work places or other institutions to prevent or deter the commission of acts of sexual harassment and to provide the procedures for the resolution, settlement or prosecution of acts, of sexual harassment by taking all steps required.”

The Vishaka Guidelines, handed down by the Supreme Court in 1997, were broadened in the 2013 Sexual Harassment of Women at Workplace (Prevention, Prohibition and Redressal) Act, which stipulated clearly what constitutes sexual harassment and established guidelines for what employers must do to protect their employees from the practice and how to respond to complaints wheresoever they arise (accessible here).

The legislation, however, has been criticised. Activists have said the law does not go far enough in dealing with sexual harassment, a complaint the government has been cognisant of with plans to tighten the legislation. Monica Sakhrani, of the Tata Institute of Social Sciences, points out the inadequacies, asserting in Economics & Political Weekly (EPW) that the Act “restricts the rights of women, dilutes the due process rights, and reduces the liability of employers.” Issues ranging from a needlessly restrictive statute of limitations, necessitating that a complaint be filed three to six months after a transgression has taken place, to “a huge gap in laying down the manner of conducting the inquiry” are among the manifold problems Sakhrani flags.

EPW, meanwhile, point to a deeper truth. Legislation is insufficient as a sole tool in combating sexual harassment and sexual violence more broadly. The root cause of sexual discrimination and bias within the workforce must be addressed. “It is not simply enough to strengthen the law, prescribe severe punishments or establish Internal Complaint Committees,” the publication writes. “What needs to be addressed is the larger issue of the inherent gendered power relations of workspaces.”

As such, despite efforts to tackle the problem, sexual harassment persists throughout India, a country once described as the most dangerous country in the world to be a woman. “India has shown utter disregard and disrespect for women … rape, marital rapes, sexual assault and harassment, female infanticide has gone unabated,” Manjunath Gangadhara, an Karnata state government official, said at the time. “The [world’s] fastest growing economy and leader in space and technology is shamed for violence committed against women.”

The recent case of a newborn girl buried alive served as a reminder of the sex discrimination plaguing the country, which is missing 63 million girls and women thanks to endemic sex-selective abortion (even though the practice is illegal in India) and postnatal gender discrimination which leads to the deaths of 239,000 girls under the age of five each year.

The risk of violence and harassment in the workplace contributes to a dearth of female participation in the labour force in India, at considerable cost to the economy and to India’s socioeconomic development. Without addressing both sexual harassment and violence and the issues which allow for it to proliferate throughout the country, India will continue to see its socioeconomic development held back – and the safety and welfare of its girls and women compromised.