You are here: Home / Featured / Smoking in public: Is a ban on the cards in Goa? 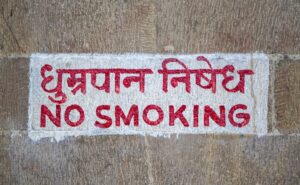 A ban on smoking in public places is on the cards in Goa, according to state health minister Vishwajit Rane.

“We are committed to making Goa tobacco-free,” Rane said. “For that we need to ban smoking in public places. The government will identify smoking zones in the state. Violators will be punished heavily.” Smoking is banned at the national level in certain public places, although state governments may enact stricter laws of their own accord.

Whilst the number of Indians who smoke is falling, the habit still incurs a heavy death toll in the country with more than 89 million Indian adults smoking every day and more than 900,000 people losing their lives to the effects of tobacco use every year. In addition, 17.8 percent of Indians use smokeless tobacco.

In Goa, 9.7 percent of adults smoke or use smokeless tobacco. The proposed ban on public smoking comes at a time of increasing cancer cases in the state, with lung cancer being the leading killer among all cancer types for men in the state, followed by oral cancer. Tobacco use is a major risk factor for both diseases, as well as a range of other noncommunicable conditions, including other types of cancer.

At the national level, lung cancer is responsible for 7.5 percent of cancer cases and ten percent of cancer deaths. Two million Indians are affected by the disease every year. Meanwhile, head and neck cancers – which include oral cancer – account for thirty percent of India’s cancer burden. Concerningly, cases are expected to double by 2030.

While tobacco use is harmful for the user, it is also harmful to those around them. The World Health Organization (WHO) estimates that secondhand smoke kills 60,000 people every year. State governments taking step to reduce exposure to passive smoke is an encouraging move, one which could play a significant role in reducing India’s cancer burden.