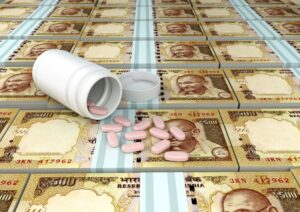 “We together have achieved several health milestones, especially India being certified polio-free,” Vardhan said as he inaugurated the 13th Conference of the Central Council of Health and Family Welfare, attended by thirteen health ministers from states and union territories. “This has been possible because of our collaborative efforts. If all health ministers come together for a cause, no task can be impossible.”

As such, Vardhan called for a “collective increase in healthcare spending by the states/UTs to meet the goals of healthcare spending of National Health Policy 2017, which is 2.5 percent of GDP, by 2025.” States should spend at least eight percent of their budget on health to achieve this, he added. Health spending has long languished in India as a proportion of GDP, hovering just above the one percent mark. Two-thirds of funding comes from states, leading to calls from experts for increased allocation to health by the Centre.

In the absence of adequate health expenditure by the Centre, out-of-pocket spending is widespread in India. In 2014, 65.6 percent of healthcare costs in India were borne by patients out-of-pocket though more recent data suggests a percentage closer to eighty percent. Many are driven into poverty by this, lending impetus to schemes such as Ayushman Bharat which provide coverage to Indians below the poverty line.

Vardhan utilised the Conference to praise advances on numerous fronts and announce further initiatives. As well as polio eradication, the Minister lauded Ayushman Bharat, which he said had benefited fifty lakh impoverished Indians. Vardhan launched a campaign to effect further reductions in infant and maternal mortality, entitled Surakshit Matritva Aashwasan or ‘SUMAN’. The Union Cabinet was recently updated about progress made under the National Health Mission to this end.

“Emphasizing better coordination between the [Centre] and the states, I said that our Prime Minister…wants to convert constitutional federalism into Cooperative Federalism so that everyone can move forward together,” the Minister tweeted. Speaking at the Conference, Vardhan said “health needs to become a social movement in across India and the ‘Eat Right and Fit India’ movements need to be taken up by states and UTs in a synergised manner to ensure a healthy and robust India.”