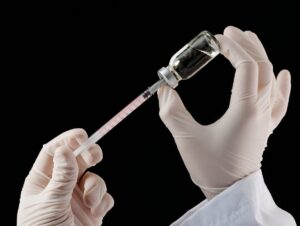 The diphtheria vaccine is an essential component of ensuring child health – making it concerning news that so many children in Karnataka are missing out on it.

Vaccination coverage among children aged between five and six is just 48 percent in the state, with regards to the DPT booster-2 vaccine – targeting diphtheria, pertussis (or whooping cough), and tetanus. The vaccination schedule involves a pentavalent vaccine given at 1.5, 2.5, and 3.5 months; a first DPT booster administered between the ages of sixteen and 23 months; a second DPT booster administered at the age of five; and then a tetanus and diphtheria booster (TD) given at the ages of ten and sixteen.

Coverage with the TD booster is even lower than that of DPT-2, with just 47 percent of ten-year-olds in the state being covered by the first TD booster and a mere 39 percent of sixteen-year-olds being covered by the second. This is concerning news, fuelled in part by shortages of the required vaccines. The DPT-2 and TD boosters are both in short supply, according to the state health department, making robust immunisation coverage a challenge until stocks rise to meet demand.

“Lack of access to the diphtheria vaccine means it is unsurprising that it was reported at the beginning of the month that Karnataka had witnessed a twofold increase in its diphtheria cases in the space of just eight months – and lives are being lost. Twelve deaths have been reported as of August 17th.”

Lack of access to the diphtheria vaccine means it is unsurprising that it was reported at the beginning of the month that Karnataka had witnessed a twofold increase in its diphtheria cases in the space of just eight months – and lives are being lost. Twelve deaths have been reported as of August 17th. It is also unsurprising that the age demographics with the lowest vaccine coverage account for the majority of cases: 27 percent of infections were reported in five-to-seven-year-olds and 26 percent in ten-to-sixteen-year-olds.

The news comes against a backdrop of falling diphtheria immunisation throughout India. Cases reached a thirty-year-high in 2018, as doctors warn of falling immunisation levels. As an example of this, a recent case in Karnataka’s Kalaburagi district saw an estimated 25 medical students at the Gulbarga Institute of Medical Sciences contract diphtheria.

India is considered the diphtheria capital of the world, accounting for an estimated ninety percent of cases worldwide. Scaling up vaccine coverage is essential to reduce transmission of the disease. Educating the public that diphtheria is still a present threat to public health and countering misinformation that engenders vaccine scepticism and hesitancy is a vital component.

In Karnataka, efforts will be underway to vaccinate young people against diphtheria. The state government has written to the Centre to request additional supplies of vaccines, with an estimated eleven lakh doses needed. They are hopeful to receive them by October, after which diphtheria cases in the state could decline – provided the vaccination drive is as robust as it needs to be.

“The immunisation programme for Diphtheria prevention in schools must be robust…which may not be the case in all schools,” a World Health Organization representative told The New Indian Express. “The department plans to begin vaccination programmes in all government and private schools, anganwadis, among others.”