A major campaign to improve nutrition in India has been launched, as the Centre tells the country it’s high time to start eating right with the launch of the Eat Right India movement.

“The ‘Green Good Deeds’, a campaign to protect [the] environment and promote healthy living, has found global acceptance, and the ‘Eat Right India’ movement is also set to become a global best practice with the support of national and international stakeholders,” Union Health Minister Dr Harsh Vardhan said as he launched a year-long campaign to address malnutrition.

The movement will incorporate mass media, including social media, as part of its outreach to generate public awareness. Among the initiatives are a logo showing the components of an optimal diet; training for healthcare workers on the frontline; an online retailer selling merchandise promoting healthy diets; and online quizzes to raise awareness of proper nutrition. “I launched the new #EatRightIndia movement logo that represents a healthy ‘Indian Thali’ for a wholesome diet,” Vardhan tweeted. “Its bands depict all food groups [and] the appropriate quantity in which they need to be consumed for optimum health.”

The launch comes amidst the Rashtriya Poshan Maah, a month-long movement under the government’s National Nutrition Mission. Launched during the 2017-18 fiscal year, the goal of the National Nutrition Mission is to “supervise, monitor, fix targets and guide nutrition related interventions all over the Ministries. It will also monitor an assortment of schemes contributing towards addressing malnutrition in India.”

The Rashtriya Poshan Maah was launched on September 1st, with Prime Minister Narendra Modi calling it “a commendable initiative to ensure a healthier future…I urge people from all walks of life to support this exceptional endeavour.” Under the scheme, states and union territories will run campaigns to raise awareness of the importance of proper nutritional standards in everyday life as a means of improving health and wellbeing, for both the rich and the poor.

India currently grapples with what is termed a ‘dual burden of malnutrition’, with significant proportions of the country being underweight and significant proportions being overweight or obese. As Health Issues India reported earlier this year, parliamentary constituencies nationwide display prevalence of conditions such as stunting among children under five between fifteen to 63.6 percent; of underweight children between 11.1 to 60.9 percent; of children living with wasting between 5.9 to 39.6 percent; and of anaemic children between 17.8 to 83.6 percent.

Obesity, meanwhile, is associated with elevated risk of a plethora of noncommunicable diseases, such as diabetes and heart disease, which account for an increasing proportion of India’s disease burden. Heart disease is the country’s leading killer, whilst NCDs as a whole are responsible for 61 percent of all deaths in the country. \ 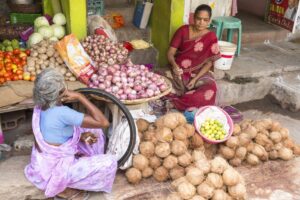 Diseases linked to malnutrition in all its forms are immensely costly to the national exchequer and exert an enormous toll on the country’s already overburdened public health system. This highlights the necessity of programmes to improve nutritional standards, raising awareness among Indians of the importance of a healthy, balanced diets and to ensure that children nationwide receive the nutritional support they need for a healthy future.

“The message of the ‘Eat Right India’ movement is what the [World Health Organization] has been saying all along,” said WHO Southeast Asia Region Director Dr Poonam Khetrapal Singh. “There has been a shift in the mortality due to communicable diseases to noncommunicable diseases, like diabetes, hypertension, heart disease and cancer across the world. The four main factors to prevent non-communicable diseases are healthy diet, physical exercise, avoidance of tobacco and alcohol. Therefore, the message of ‘Eat Right’ should be promoted everywhere. Citizens should choose healthy food and the food industry should manufacture healthy food.”

“The Eat Right India movement is a crucial preventive healthcare measure,” adds Vardhan, “to trigger social and behavioural change through a judicious mix of regulatory measures, combined with soft interventions for ensuring awareness and capacity building of food businesses and citizens alike.” One is indeed hopeful that this movement will go some way towards addressing this burden, as well as the manifold socioeconomic and health implications of malnourishment, for the betterment of Indian society.