You are here: Home / Environmental health / Recycling plastic into diesel: A novel approach 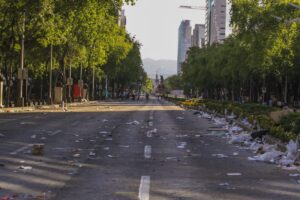 Recycling is one of the main ways we are encouraged to limit our output of plastic waste. In Dehradun, the Council of Scientific Research’s Indian Institute of Petroleum (CSIR-IIP) is taking a somewhat novel approach to the practice by converting plastic waste into diesel oil.

A plant for this purpose has been established at the CSIR-IIP campus in the Uttarakhand state capital, which is reportedly only the fourth of its kind worldwide. Dr Harsh Vardhan – the Union Minister for Science and Technology, Earth Sciences, and Health – was in attendance to inaugurate the plant, which has been in development for ten years. Vardhan has expressed hope that, should the BJP win next year’s Legislative Assembly elections in Delhi, work can commence to build a similar facility in the national capital.

“We import either crude oil or petrochemicals to make plastics, which are dumped after use into the environment. Their accumulation and lack of biodegradability causes harm to animals, plants and humans,” said Vardhan. “When it is deliberately burned or catches fire in landfills, it adds to the air pollution load and to respiratory diseases. The Government is committed to phase out single-use plastics and to facilitate sensible management of plastics that need to be used for multiple-use or long-term applications.” He urged collaboration between the IIP and the natural gas company Gail, Ltd. to roll out the technology at the national level.

The facility has the capacity for recycling one tonne of plastic waste each day, from which it can produce 800 litres of diesel oil. Non-government organisations will assist in collecting plastic waste for conversion. The facility is cost-effective according to IIP scientists, who are optimistic that the site can recoup its costs within a few years. Diesel produced at the plant will fuel government and other official vehicles.

Vardhan said that operations at the plant carry a twofold advantage, enabling India to both reduce its dependence on imports of fuel and to manage its considerable burden of plastic waste. “By producing diesel out of plastic waste on a large scale,” he said at the launch, “the plant is not just a good step towards freedom from plastic but will also reduce our dependence on other countries for petroleum products.”

“Consumption of plastic is increasing at a rate of ten percent each year. Unless better collection and recycling practices are implemented, plastic waste is likely to increase in tandem.”

Indians consumed 16.5 million tonnes of plastic during the 2016-17 period with eighty percent of plastic in the country being discarded as waste. In addition, consumption of plastic is increasing at a rate of ten percent each year. Unless better collection and recycling practices are implemented, plastic waste is likely to increase in tandem. Uttarakhand alone expects its plastic waste output to double in the next 23 years.

The sheer magnitude of India’s plastic waste output necessitates solutions, with the endeavour at the IIP being one example. Scientists there are optimistic that it provides an environmentally beneficial route towards minimising the country’s plastic waste burden. “It is the first such plant set up by a government research institute in the country,” says Sanat Kumar, senior scientist-in-charge of the initiative at the CSIR-IIP.  “For the next eight to nine months, we will study the functioning of the plant and analyse data, following which we will be in a position to transfer the technology to the industry and the government.

“The government can use this technology to set up such plants in the municipal areas to deal with the problems of hazardous waste plastic. The potential for this technology is huge.”