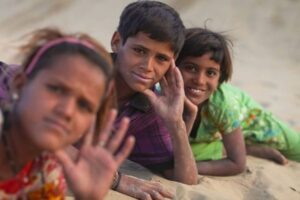 Kerala is the best-performing state in India when it comes to child welfare, whilst Madhya Pradesh is the worst. This is according to the Child Well-being Index, a joint report by World Vision India and IFMR LEAD, unveiled yesterday

Kerala secured the top spot with an overall score of 0.76, followed by Tamil Nadu and Himachal Pradesh, both with scores of 0.67. Madhya Pradesh, meanwhile, scored 0.44, with Jharkhand and Meghalaya scoring 0.5 and 0.53 respectively.  Sikkim, Goa, Punjab and Mizoram rounded out the best-performing quartile. Andhra Pradesh, Assam, Rajasthan, Telangana, and Gujarat comprised the rest of the worst-performing quartile. Of the country’s union territories, Puducherry topped the rankings with an overall score of 0.77.

The report credited Kerala with “providing a healthy start to its children”. Low-performing states often saw indicators such as sanitation, nutrition, and survival rates flagged as reasons for their low score, with this being true of Madhya Pradesh and Jharkhand. Of the latter, the report observed “survival, nutrition and basic education are other aspects in which Jharkhand performed lowest among all Indian states.”

Health was one of three parameters across which states were measured, the others being protective contexts and positive relationships. On health, even high-performing states often saw their rankings slow. Down to Earth pointed out that, even though Tamil Nadu ranked second overall, it ranked fifth on health. Such a disparity suggests that even India’s best performers when it comes to child welfare need to effect improvements on child health in-line with other advances made in promoting and advancing young people’s development. Vice versa, some states which performed poorly were ranked relatively highly on health. Andhra Pradesh, which ranked fourth from the bottom, placed twelfth in terms of child health.

On a global level, India ranked 113th out of 176 countries on child wellbeing according to a Save the Children report released earlier this year. Several key indicators were highlighted as needing improvement. For example, India’s prevalence of stunting in 38.4 percent among children aged 0-59 months and its under-five mortality rate is 39.4 deaths for every thousand live births. On both indicators, India has shown progress. However, its number of children under five affected by stunting remains the highest in the world whilst its under-five mortality rate still exceeds that outlined by Sustainable Development Goal (SDG) targets.

The latest report by World Vision India highlights what The British Medical Journal (BMJ) drew attention to in a 2017 study, noting significant variation between states in their performance on child health indicators such as mortality. Indeed, inequality frustrates India’s progress against health on a broader level – and child health is no exception. Ensuring a multisectoral approach considering all aspects of welfare – with the BMJ paper advocating for a Kerala-like model – could go some way towards effecting much-needed improvements in the lives of India’s youth.

“The report highlights the multi-dimensional approach towards measuring child well-being – going beyond mere income poverty,” said Cherian Thomas, national director and chief executive officer of World Vision India. “Children have the potential to transform the country, but if neglected, they will exacerbate the burden of poverty and inequality. It is imperative that all stakeholders prioritise and invest in the well-being of our children.”