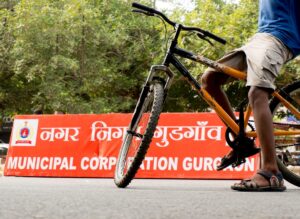 Dr Harsh Vardhan marked the beginning of his second stint as Union Health Minister by cycling to work on the occasion of World Bicycle Day, welcoming the benefits of cycling for health and the environment.

In a tweet, the Minister cited cycling as his favourite sport and said the activity is a “simple, affordable, reliable, clean [and] environmentally sustainable means of transport.” Additionally, the health benefits of cycling should not be overlooked, especially as a means of travelling to work. Commuting by bike lowers the risk of conditions such as heart disease, diabetes, and certain cancers and improves overall mental wellbeing, some reports suggest.

In India’s heavily polluted metros, the exposure to polluted air is a relevant concern for the health of cyclists. However, research suggests that cyclists enjoy a lesser degree of exposure to pollutants in congested areas when compared to drivers and public transport users. Cyclists can also take steps to protect their health such as taking routes with lesser levels of pollution and wearing face masks to mitigate exposure (although the extent to which commercially available face masks protect against pollution has been disputed by researchers).

Understanding the benefits of cycling to work for your health is of importance at a time when much awareness is being raised about the risks of sedentary desk jobs and service to the health of Indian workers. Uptake of these professions, as opposed to occupations which involve more physical activity such as manual labouring, is a trend principally observed in urban India. A study published in 2018 observed unemployment and urban living as the two main factors tied to an elevated chance of participating in a sedentary lifestyle.

“Indians in white-collar jobs, with low levels of activity in their workday, have a higher average BMI [body mass index] than those in blue-collar occupations. Hence it suggests that engineers, technicians, mathematicians, scientists and teachers, for example, had higher BMIs than farm workers, fisherpeople and housekeepers.”

As such, it can be suggested that trends in urban employment are influencing phenomena observed in public health such as rising rates of overweight and obesity among the population and elevated levels of noncommunicable diseases (NCDs). All of this lends credence to Dr Vardhan’s encouragement of Indians to incorporate some cycling – or, indeed, any physical activity – into their daily routine and avoid leading an entirely sedentary lifestyle. This is widely considered to be beneficial to physical and mental health and could play a role in tackling India’s ever-expanding burden of chronic, lifestyle-related diseases.