You are here: Home/ Featured/ What else we’re reading: Modi win delivered thanks to faith in development pledges 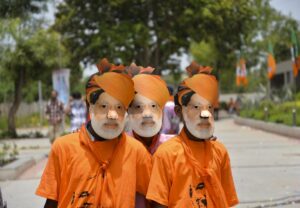 India’s electoral colossus has re-elected Narendra Modi’s BJP party, following the largest democratic exercise in the world. India has united to put Modi back in office. This is the second time since 1971 that a majority incumbent government has returned to power with majority in India.

Over the past five years, Modi’s government projected an image of working non-stop to advance the cause of those on the fringes of India’s economy. The BJP’s policy initiatives included a controversial demonetisation move to stop corruption, which created bank accounts for 356 million poor people. He also provided cooking gas connections to nearly 60 million households and brought electricity to nearly 16,000 villages, covering more then 40 million households that didn’t have it before, making all of India electrified.

Health coverage was extended to the country’s poorest citizens and more than 90 million toilets were built. Modi introduced the MUDRA scheme to give collateral-free micro loans for self-employed entrepreneurs and a unified goods and service tax for the entire country, which accelerated tax collections.

Since Modi was first nominated as a prime ministerial candidate in 2014, a debate over his government fuelling intolerance against certain groups in Indian society has deflected attention from the good work on the ground. Recently, Time magazine called Modi the “divider in chief”. But Modi successfully united the most diverse electorate in the world to come together to vote in his favour and advance his vision of developing the Indian economy.

This is no small achievement. India’s diversity, the presence of numerous regional parties that command local influence as well as religious and social groups that have preferred candidates and parties and a private media that has an anti-Modi bias make this victory an incredible achievement.

Two weeks before the elections began, the main opposition party – the Indian National Congress – released its manifesto with a promise to give a universal basic income to the poorest 20% of the Indian households. This became the core campaign message of Congress, which it believed to be a game changer.

But the promise to remove poverty from India – one that Congress has kept making since India gained independence, without managing to deliver on it when in power – did not inspire trust in the electorate. The Indian voter watched with disbelief when Modi was accused of corruption by parties (including Congress) which have histories that are riddled with scandal and corruption issues.

Development for one and all

Modi pitched the contest as one between a dynast and an incorruptible deliverer – and the Indian voter believed the track record of Modi over the previous five years, along with his message of “sabka sath and sabka vikas” (development for one and all). And the 2019 campaign was centred around the phrase “mein bhi chowdikar” (I too am a watchman) emphasising his anti-corruption credentials and presenting him as an upholder of justice.

India’s opposition parties have to rethink the strategy they have adopted over the last five years. Arguing that Modi is a divisive leader has not cut ice with the Indian voter. In Modi, the country has found a development messiah.

Over the next five years, his government will have to deliver on the long list of campaign promises. These include ensuring that every Indian family has a home of its own by the 75th year of Indian independence in 2022, doubling farmers’ incomes, developing world-class infrastructure and accelerating support to entrepreneurs and start-ups – all the while retaining the focus on inclusive development to accomplish the 75 milestones for India at 75 that the party has put forth in its election manifesto.

This article is republished from The Conversation under a Creative Commons license. Read the original article.