You are here: Home / Environmental health / Asthma inhalers are bad for the environment 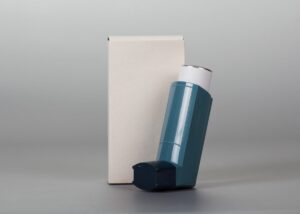 Asthma inhalers are a boon for lung patients, but they are damaging the environment according to UK researchers.

The most commonly used asthma inhalers emit, per five doses, the same amount of greenhouse gases as a nine-mile journey by car. This has prompted the UK’s National Institute for Health and Care Excellence (NICE) to encourage asthmatics to use eco-friendly devices as opposed to the ones most popular among patients at present.

The news has a bearing for India, home to between fifteen and twenty million asthmatics according to the World Health Organization (WHO). India actually accounts for one in every ten asthma patients in the world. Environmental allergens such as dust and pollen account for the majority of cases. Fifty percent of asthma cases in adults and ninety percent of asthma cases in children are believed to be caused by exposure to these allergens.

India’s asthma crisis is being exacerbated by environmental issues, most notably pollution, which acts as a notable trigger for the chronic disease and can exacerbate the condition in those who already suffer from it. In fact, some research links exposure to air pollution with the development of asthma itself.

In India, urban and rural areas alike are buckling under the weight of pollution from a range of sources. These include indoor burning of unsafe fuels; industrial pollution; crop burning; emissions from traffic; and the toxic gas which comes from the enormous volumes of garbage stored at landfill sites. The far-reaching impact of pollution is a key factor in explaining why India accounts for the most asthma-related deaths in the world.

The switchover to more environmentally friendly inhalers is actually not a new phenomenon in India. One non-government organisation (NGO) – CFC Free Inhalers – began working since 2009 to provide eco-friendly inhalers to India’s asthmatics. To build on such efforts, asthmatics should be made aware of the environmental side-effects of certain inhalers. Efforts should be made, meanwhile, to safely dispose of existing inhalers and ensure that the eco-friendly alternatives are accessible, available, and affordable for those who need them.