It is life beyond the camera, vanity and paparazzi that success stories are made of.

Emilia Clarke – star of popular US series Game of Thrones – who has excelled in her role of Daenerys Targaryen, has revealed to The New Yorker how she not only won battles and vanquished kingdoms on the sets of Game of Thrones but also won a significant battle against a life-threatening disease to save her real life.

Emila, shared her harrowing and heart-wrenching story of survival and battle with a life-threatening condition, diagnosed at a time when many girls in the world wanted to be in her shoes. She relates to The New Yorker how it was a dream come true for a British girl from Oxford to get a lead role in series produced by the prestigious American TV network HBO, based on a bestselling series of novels with a devoted fanbase. Yet, as the world took  in her beauty and talent all hell broke loose and life brought her to a cliff edge, with death staring on her face. 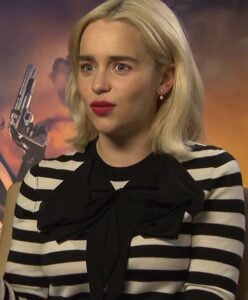 On February, 11, 2011, Emilia suffered a stroke and was rushed to the hospital. Later she was diagnosed with a subarachnoid haemorrhage (SAH), a life-threatening kind of stroke, caused by bleeding into the space surrounding the brain. She had an aneurysm: an arterial rupture, with a very small sign of survival.

Emila wrote, “The first surgery was what is known as “minimally invasive,” meaning that they did not open up my skull. Rather, using a technique called endovascular coiling, the surgeon introduced a wire into one of the femoral arteries, in the groin; the wire made its way north, around the heart, and to the brain, where they sealed off the aneurysm. The operation lasted three hours. When I woke, the pain was unbearable. I had no idea where I was. My field of vision was constricted. There was a tube down my throat and I was parched and nauseated.”

According to the National Institute of Neurological Disorders and Stroke (NINDS), each year ruptures of cerebral aneurysms occur in approximately 30,000 Americans, killing fifty percent of the patients.

Many aneurysm survivors suffer long-term or permanent loss of brain function. It is possible to survive and eventually fully recover, but the likelihood depends on the size and location of the bleed and the speed at which proper treatment can be administered and the blood vessels can repaired. Thus, Emilia had to have an emergency surgery to repair the artery.

“While I was still in New York for the play, with five days left on my insurance, I went in for a brain scan—something I now had to do regularly. The growth on the other side of my brain had doubled in size, and the doctor said we should “take care of it.” I was promised a relatively simple operation, easier than last time. Not long after, I found myself in a fancy-pants private room at a Manhattan hospital. My parents were there. “See you in two hours,” my mum said, and off I went for surgery, another trip up the femoral artery to my brain. No problem.

Except there was. When they woke me, I was screaming in pain. The procedure had failed. I had a massive bleed and the doctors made it plain that my chances of surviving were precarious if they didn’t operate again. This time they needed to access my brain in the old-fashioned way—through my skull. And the operation had to happen immediately.

The recovery was even more painful than it had been after the first surgery.”

In India, 6-16,000 are diagnosed with cerebral aneurysm in every 100,000 and 76,500 to 204,100 new cases occur in India each year. Diagnosis and management varies depending on the awareness and accessibility of healthcare. Since intracranial aneurysms are most prevalent between 35 and 60 years of age and about 40% of the ruptures are fatal, a great number of disability adjusted life years are lost. Added to this is the fact that about 62% of the population in India is under 60 years of age.

A celebrity’s story has put the spotlight on a disease that has affected several people across the world. Apart from the physical pain the patients of aneurysm go through mental traumas. Emila survived the second surgery and much more after that. Now she is preparing for the release of the final season of Game of Thrones to premiere this spring. But there are many across the world who are not as lucky. Either they fail to get diagnosed on time or do not receive proper treatment. The consequences, as Emilia’s close calls show, are deadly when this is the case.