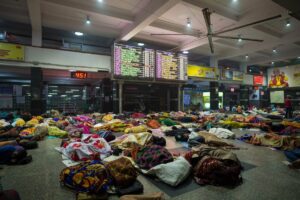 When it comes to sleep, how much is enough? And on World Sleep Day, ask yourself: am I getting enough sleep and should I worried about snoring

How much sleep you get is important for a number of reasons. Sleep affects a number of different health indicators, from healthier ageing to better weight management to improved heart health.

Experts recommend that the optimum level of sleep for adults below 65 years of age is seven to nine hours a night. Poor sleeping patterns are linked to a number of health issues. Sleep deprivation negatively affects mental activity and mental health. It also ups the risk of a number of medical conditions such as hypertension and stroke.

Ahead of World Sleep Day this year, health tech leader Philips conducted international surveys trying to find out the quality of sleep in a number of different countries including India. Promisingly, 55 percent of Indians think they sleep well. However, 73 percent still want to improve the quality of their sleep.

India actually fared well in comparison to other countries. 31 percent of Indians meditate to help them sleep well, higher than the global average of 26 percent. Meanwhile, 34 percent of Indians want to find out about treatments to help improve sleep health. 24 percent use online sources and social media to educate themselves about the importance of sleep health.

The survey did bring some cause for concern, as it suggested low awareness of sleep disorder. As an example, almost half believed snoring to be normal or caused by factors such as genetics or old age.

In fact, snoring excessively can be a symptom of obstructive sleep apnea (OSA), which causes the throat muscles to relax during sleep, blocking your airways and interrupting breathing. Apnea refers to a number of different conditions where breathing stops and starts during sleep. OSA is the most common type, with symptoms other than snoring include restlessness during sleep and tiredness in the daytime.

While OSA is a relatively common condition, it is a risk factor for cardiovascular disease such as stroke and other conditions such as diabetes and hypertension. Because of the tiredness OSA induces, it also makes accidents more likely, such as during driving or in the workplace.

OSA also increases the chance of the sufferer gaining weight and becoming obese, which carries further implications for health. OSA sufferers have a thirty percent higher risk of suffering a heart attack compared to those without the condition. As a result, experts say those with symptoms of OSA should see a doctor.

World Sleep Day is a chance to take stock and explore how healthy your sleeping patterns are. It is important to remember that there are more significant consequences of not getting enough sleep than tiredness. In some cases, the consequences can be life-threatening.