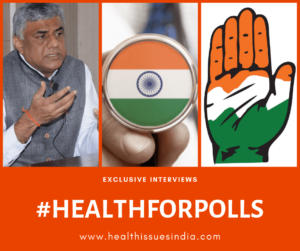 In a bid to make public health a part of national discourse ahead of 2019 elections, Health Issues India is speaking to policymakers and health experts to understand the long-standing issues surrounding healthcare in India and attempt to find solutions as part of its ongoing series, Health For Polls.

Today, we are in conversation with Parliamentarian and Indian National Congress Leader Rajeev Gowda to understand what strategic vision the INC has for healthcare in India.

Ques.: How do you think the Modi government has performed in the last five years to increase access to healthcare?

Ans.: The Modi govt has come up with several healthcare initiatives, especially Ayushman Bharat. It is an insurance programme which allows people to get access, not only to the current government facilities, but also private ones. We are hopeful that the prices paid by them would draw more providers, as questions are being raised regarding that currently. Though the programme was announced in 2014, it took four years to be launched, so the enrolment is still on, and it needs to be seen if it reaches its target of covering 40 percent of the population.

Ques.: Through Ayushman Bharat, the government has shifted from being a healthcare ‘provider’ to a healthcare ‘payer’. Do you think this is the right policy approach?

Ans.: I don’t think it is a right policy approach and I am sceptical that it would work. If you take the example of America, it has resulted in the escalation of cost and exclusion of large sections of the population. We may end up in a similar situation here as well. Congress wants to focus on public provision so we would concentrate on prioritising public services.

Ques.: Do you think if Congress comes to power it will carry forward the Ayushman Bharat legacy?

Ans.: If you look at the Ayushman Bharat scheme, it is similar to Rashtriya Swastha Bima Yojana that UPA had initiated. Several policy continuities take place after a new government comes to power. Even though the BJP had opposed Aadhar and GST when they were in opposition, they continued these schemes once they came to power and embraced them as if they were their own. We are not petty and would focus on either improving the programme or continue something that’s doing well.

Ques.: The Modi government has placed health high on its agenda by taking a giant leap to increase accessibility. What about health quality?

Ans.: We have a massive shortage of doctors and facilities, and it is a huge problem we are facing. We have a long way to go in terms of not only increasing the number of healthcare professionals and healthcare staff but also taking advantage of growing technology to enhance healthcare facilities. I am hopeful if we use technology to improve medicare, such as training primary healthcare staff for diagnostics and then provide the information through the telemedicine portal, then the nature of access is expected to change. There is a considerable imbalance between quality healthcare in urban and rural India and also in terms of regions. AIIMS are being set up across the country, but they are facing difficulty finding quality-efficient medical staff. We need to find a way to incentivise experienced doctors to go to areas that are underserved and make rural facilities equipped with excellent infrastructure.

Ques.: Healthcare budget is a big hindrance in improving the quality of facilities. Do you think it is a lack of political will that is not enabling an increase of healthcare budget above 1.4 percent of GDP?

Ans.: It is a question of competing priorities. According to the current political discourse, taking into consideration the recent Budget allocations, farmers were incentivised, and lower middle class got tax benefits. So there are other priorities overtaking healthcare. A lot of budget healthcare is out of pocket in India as compared to several other countries, and the catastrophic impact is so severe that one severe illness in a family can drive them below the poverty line. So yes, every political party is very concerned about this, but other priorities end up being more urgent. Personally, I would want to

ensure an increase in the budget, but an increase in budget won’t help to incentivise the doctors. Public-Private partnership investments are more than the figure of 1.4 percent of GDP as mentioned above.

Ques.: Do you think the Congress party has put together its thoughts regarding the vision for healthcare in India as it gets its manifesto ready?

Ans.: Congress Party is still conducting manifesto consultations, including on the theme of healthcare, food security and nutrition, we are going around the country to different groups of public and experts. We have also gone to tribal dominated states on how we should take it forward. We have received several inputs, which are being translated into manifesto agendas and the process is not over yet.

Ques.: In the Union Budget 2019 we saw budget allocations for National Rural Health Mission, and National Urban Health Mission reduced, whereas there is a significant increase in funds for AYUSH Ministry. Do you see it as a misguided step?

Ans.: Reduction of allocations towards National Rural Health Mission is a misguided step whereas allocations for AYUSH Ministry is a step in a positive direction as traditional healthcare cures like yoga have good benefits and in times of lifestyle disease and should be seen as good precautionary measures