You are here: Home / Access to Healthcare / Delhi High Court hits the brakes on bike ambulances 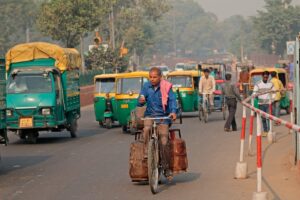 Just days after its launch, the Delhi government’s ‘ambulances on bikes’ initiative has hit a legal roadblock following a suit filed in the Delhi High Court.

Seventy percent of the staff manning the bikes – known as ‘first responder vehicles’ (FRVs) – are not trained paramedics, claims the public interest litigation (PIL) filed by petitioner Satakshi Verma and advocate Kamlesh Kumar. Rather, they are existing ambulance assistance officers (AAOs), the majority of whom are more than fifty years of age. The plea calls on trained paramedics to staff the FRVs as opposed to AAOs, in the interest of patient safety.

Delhi High Court Chief Justice Rajendra Menon and Justice V. Kameswar Rao heard the plea. In response, they have called on the Delhi government and the Centralised Accident and Trauma Service (CATS) to make clear their stance on the issues raised in the PIL. Their response should include affidavits offering completed details of the scheme.

“Trained, young and energetic paramedics who have the requisite medical qualification and a valid license to drive a two-wheeler” should staff the FRVS, Verma claimed in her suit. Current proposals to use AAOs would fail to meet patients’ needs and satisfy parameters of healthcare quality, the suit contends.

The Delhi government’s scheme came as a response to the national capital’s congestion crisis, which can make it difficult for ambulances to reach patients in need in a timely manner. The initial launch saw a fleet of sixteen FRVs dispatched to service East Delhi on a pilot basis.

CATS Head L. R. Gag has defended the initiative. “All the personnel riding the bike ambulances have been given a nine-month in-house training, covering all basic first aid techniques, including providing CPR and oxygen therapy,” Garg said. “They received training in riding bikes and communicating with patients and relatives. Their role is the same as what they were doing in normal ambulances.”

“They do not have to transport the patients, so age should not be an issue,” he added.

The suit, however, maintains that the lack of technical qualification means the AAOs are inappropriate staffers for the FRVs. “Complications may occur in emergency situation and cases of severe trauma or internal bleeding may require surgical intervention,” the suit points out. In these situations, the petitioner maintains, “trained personnel are required.”

The case is due to be heard again before the Delhi High Court on May 2nd.