You are here: Home / Access to Healthcare / Uttarakhand makes vaccination a must for schoolchildren 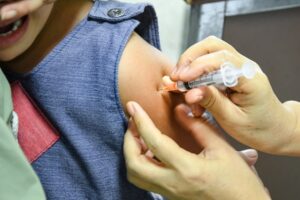 Immunisation rates in the state fell to just 61.32 percent of children aged nine to eleven months in 2017-18. This was down from 99.3 percent coverage in the 2015-16 period. Rates reportedly improved to just 68 percent later in the year. The sharp drop in immunisation rates made Uttarakhand the third worst state in India in this regard. Only Nagaland and Andaman and Nicobar fared worse.

In a bid to get more children vaccinated, school admission will depend on whether the child has a ‘Vaccination Card’. State health officials hope the policy will steer Uttarakhand towards the target of 100 percent immunisation outlined by the Universal Immunisation Programme.

The new policy will apply to parents seeking to admit their children at both private and government-run schools. Health workers including accredited social health activists (ASHAs) and auxiliary nurse midwives (ANMs) will be involved in the scheme. They will coordinate with schools to facilitate full immunisation of children who are not fully vaccinated or have not been vaccinated at all.

Full immunisation is defined as vaccination with the BCG tuberculosis vaccine; three doses of the DPT vaccine against diphtheria, pertussis (whooping cough) and tetanus; three doses of the oral polio vaccine; and one dose of the measles vaccine. Vaccination is an essential measure in curbing rates of infectious diseases and preventable deaths from the same.

Polio, which India eradicated in 2014, is an example of one of the country’s most successful immunisation campaigns. Yet recent scares about a potential resurgence of the disease serve only to highlight the importance of ensuring immunisation rates are maintained.

India loses the lives of five lakh (500,000) children every year to vaccine-preventable diseases. Driving up immunisation rates may require policies such as that being advanced in Uttarakhand. This is for the sake of broader public health: to prevent diseases within the ability of the country to get rid from making an unwelcome comeback.