You are here: Home / Medicine and Research / Bidis: How much do they really cost? 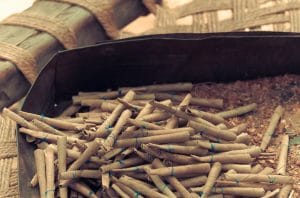 The price of smoking bidis doesn’t stop at the cost of the cigarette itself. Thanks to its effect on health, India loses Rs 800 billion ($11.4 billion) to the poor man’s cigarette every year.

Bidis are more commonly smoked in India than conventional cigarettes and other tobacco products. Of the more than 104 million Indians who use tobacco products, around 72 percent smoke bidis.

Bidis are small hand-rolled cigarettes made of tobacco and wrapped in tendu or temburni leaf — plants that are native to Asia. Despite the common perception that Bidis may be more healthy than conventional cigarettes, this is simply not the case.

Bidis do not contain the amount of chemicals added to cigarettes in order to aid combustion. While this may initially seem like a positive, it forces the smoker to inhale harder and more frequently. This more frequent inhalation causes the toxic chemicals to be absorbed into the lungs at a higher rate.

Bidis contain more carbon monoxide and tar and up to five times as much nicotine when compared to conventional cigarettes. This increases the risk of numerous cancers, lung diseases, and heart ailments.

“Health costs of bidis for Indians far outweigh what they make the country. In the 2016-17 fiscal year, bidis made India just Rs 4.17 billion in tax revenue”

India incurs a high cost from the use of bidis, driven by ill health and early deaths. This is according to a study published in Tobacco Control, which puts the healthcare-related costs of bidis at 0.5 percent of India’s GDP and more than two percent of its total spend on healthcare.

Health costs of bidis for Indians far outweigh what they make the country. In the 2016-17 fiscal year, bidis made India just Rs 4.17 billion in tax revenue.

“The brunt of costs are borne by lower-income households”

The brunt of costs are borne by lower-income households. Out-of-pocket healthcare spending represents almost two thirds of all healthcare spending in India. Of this, ‘catastrophic’ costs impoverish millions. The 2011-12 fiscal year alone saw 55 million Indians fall below the poverty line because of their healthcare costs.

The study suggests bidi smoking could exacerbate the problem, given their relative popularity among the poor and numerous health hazards – even when compared to other tobacco products.

Not only are they inexpensive, bidis are not as stringently regulated as other tobacco products. This creates a perfect storm for a public health crisis to ensue and highlights the importance of regulating bidis on an equal footing with other tobacco products. This is vital not only in improving health outcomes for smokers. It is also essential in ensuring that the progress India has made in trying to curb tobacco use in recent years is not in vain thanks to bidis’ continued popularity. a crisis often overlooked but which India cannot afford to ignore any longer.

The study published in Tobacco Control can be accessed here.