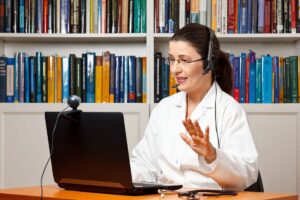 Telemedicine can provide a useful route for patients getting a consultation who otherwise face difficulty in seeing a doctor. However, the country’s apex doctors’ network has called for clear guidelines on the practise amidst legal uncertainty following a recent court case.

Two doctors were found culpable by the Bombay High Court (BHC) in the death of a new mother for whom they prescribed medicines over the telephone. The woman was actually suffering an embolism (a blockage in a blood vessel), which – owing to the lack of a physical consultation – went undetected and untreated and ultimately proved fatal.

This case of ostensible medical negligence has been interpreted by some as triggering a backlash against telemedicine. This involves using electronic methods of communication to treat patients when a doctor is not physically available.

The practise has often been heralded as a positive development. A 2008 paper called telemedicine “a new horizon in public health in India” and the industry has witnessed significant growth in India in recent years. The market is projected to be worth more than Rs 200 crore (27.6 million USD) by 2020.

However, the BHC’s ruling has sparked concerns that the practise is now effectively illegal in India. As such, the Indian Medical Association (IMA) has written to the Medical Council of India (MCI). The fraternity is seeking clear guidelines on the use of teleconsultation by doctors to treat patients. It had earlier called for members not to prescribe medicines telephonically.

“Online consultations, online prescriptions and telemedicine are all topics which have posed ethical dilemmas,” said IMA President Dr Ravi Wankhedkar in a statement. “But at the same time, advancing technology can be harnessed for augmenting healthcare in remote areas the MCI must come out with clear-cut guidelines on these important issues.”

Digital technology has the potential to revolutionise healthcare in India and promote its accessibility and affordability. It has manifest in numerous innovations, ranging from an online tool to predict heart disease to computer simulations to predict and track the spread of HIV.

Telemedicine could form an integral part of the e-health industry in India. It carries the potential to enhance healthcare delivery, especially for remote populations. Yet, to prevent tragedies as in the case deliberated by the BHC, there must be an appropriate regulatory framework for doctors to operate within when offering teleconsultations. That the IMA is seeking such a framework from the MCI is good news. It could lend the telemedicine industry a more stable foundation upon which to expand in the years to come.