You are here: Home / Featured Stories / HPV vaccine drive for girls in Sikkim 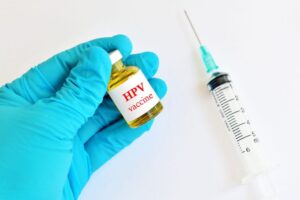 A scheme is underway to vaccinate girls in the northeast state of Sikkim against the human papillomavirus (HPV).

The programme is expected to reach 32,000 girls aged nine to fourteen over the next fortnight. They will be administered the first dose of the HPV vaccine in the next two weeks. The second dose will be given in six months’ time to ensure full protection.

The scheme was launched on Monday in Namchi, capital of the state’s south district. There 1,817 girls were administered the vaccine.

The Department of Healthcare, Human Services and Family Welfare is running the initiative with the support of the World Health Organization (WHO) and UNICEF. The vaccine is being supplied to the state government by UNICEF for just Rs 400 per dose. This is compared to the market price of Rs 3,000 per dose.

The scheme marks the first statewide immunisation drive against HPV in India, according to state health secretary Vishal Chauhan. “Punjab is the other state which has undertaken the vaccination drive, but it has only covered two districts,” Chauhan added.

“Despite the effectiveness of the HPV vaccine, its use in India has been the subject of controversy”

The initiative was announced to protect Sikkim’s girls against cervical cancer. The second most common form of cancer among Indian women, cervical cancer accounts for seventeen percent of all cancer deaths in the country.

HPV is a group of more than 150 different viruses which are often sexually transmitted. Two HPV strains – types 16 and 18 – are responsible for seventy percent of cervical cancer cases according to the WHO. The HPV vaccine is considered a valuable tool in the fight against cervical cancer, as clinical trials suggest it is 99 percent effective against cancers caused by HPV 16 and 18.

Despite the effectiveness of the HPV vaccine, its use in India has been the subject of controversy. As reported by Health Issues India earlier this year, the Union Ministry of Health and Family Welfare (MoHFW) decided against its inclusion in the country’s Universal Immunisation Programme (UIP).

Some suggested this was due to the objections of the Swadeshi Jagran Manch (SJM). Ashwani Mahajan, national co-convener of the SJM, wrote to the Centre in December last year expressing opposition to inclusion of the HPV vaccine in the UIP.

SJM is an affiliate of Rashtriya Swayamsevak Sangh (RSS). One of the most prominent members of the Sangh Parivar family of Hindu nationalist groups, the RSS is considered to be an influential forebearer of India’s ruling Bharatiya Janata Party (BJP).

For as long as provision of the HPV vaccine is not facilitated by the Centre, more state governments may find themselves assuming the mantle of ensuring the health and wellbeing of girls by protecting them from a deadly and preventable condition.

The initiative of the Sikkim government is undeniably positive news. However, it also serves as a reminder that, nationwide, young women are needlessly being put at risk of developing cervical cancer – a risk that is all too present and all too preventable.