You are here: Home / Access to Healthcare / It’s not just farmers who are killing themselves. Farm workers are too. 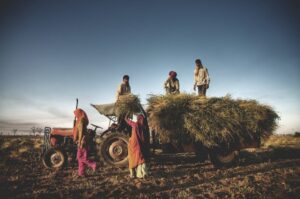 Much of the attention surrounding the suicide crisis on India’s farmlands has centred around the farmers. However data shows that farm workers are killing themselves in droves, in what is the latest spotlight shone on the desperation and despair faced by those who till India’s soil and rear its livestock.

Farm worker suicides outnumbered those of farmers in 2014-16 in some states. In Tamil Nadu, for example, 1,776 farmhands committed suicide compared to 106 farmers.

The situation may in fact be getting worse for farm workers. Between 2015 and 2016, farmer workers actually dropped by 21 percent. However, farmhand suicides increased by ten percent.

“Farm workers are killing themselves in droves, in what is the latest spotlight shone on the desperation and despair faced by those who till India’s soil and rear its livestock”

It is understandable why this might be the case. Labourers often depend on farmers for their livelihood. A downturn in farmers’ fortunes may lead to jobs being lost. Other work may be hard to come by.

Government schemes aiming to help farmers, such as loan waivers, rarely translate to benefits for farm workers. For them, financial assistance is often difficult to avail. This can lead to monetary desperation. Last year, it was found that 77 percent of agricultural labourers in Punjab who committed suicide did so because of debt. Despite the clear problem that debt poses for farm workers, monetary benefits for them are difficult to avail. Therefore, it is unsurprising – though no less tragic – why many farm workers see suicide as their only option.

“In rural communities, mental healthcare is often nonexistent. Efforts to scale up…outreach could go some way towards reducing the number of suicides among India’s farm workers”

It, of course, does not have to be this way. Mental healthcare across India is inadequate, with a treatment gap of fifty to seventy percent. In rural communities, mental healthcare is often nonexistent. Efforts to scale up mental healthcare through outreach could go some way towards reducing the number of suicides among India’s farm workers.

“Mental health interventions, in particular targeting depression and alcohol abuse, are likely to greatly reduce the burden of suicide in farming communities,” psychiatrist Dr Vikram Patel told Health Issues India last year. “Much of these interventions can be effectively delivered by front-line workers with appropriate training and supervision.”

The hardships facing India’s farmhands are manifold and particularly dangerous when interacting with pre-existing mental health conditions. Ensuring that the right treatment is a vital step towards lowering the scourge of suicide among their number.