You are here: Home / Environmental health / You kill for cow, but don’t care for Mother Ganga? 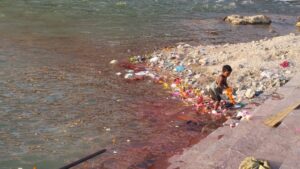 Hindu tradition has it that if you bathe in the waters of the River Ganga, your sins get washed away. Every year, seventy million visit the river to do just that. But now the National Green Tribunal (NGT) has compared a dip in the holy river to being as ‘injurious to health’ as a packet of cigarette.

The pollution of the Ganga poses a significant public health emergency. This is so much so that NGT has asked why the water does not carry warnings that it is ‘injurious to health’ like those found on cigarette packets. The tribunal even alerted that river water from Haridwar in Uttarakhand to Unnao in Uttar Pradesh was unfit for consumption and bathing. The most critical area is marked as Jaimau in Kanpur where effluents are being discharged by the tanneries.

“We are of the view that on account of great reverence to great Ganga, innocent persons may drink and bathe without knowing that the water is unfit for consumption. It is of utmost necessity to comply with the right to live of persons using Ganga water and they are put to notice about the fitness of water,” said a bench headed by NGT chairperson A K Goel.

This is anything but hyperbole and a big irony. Ganga’s water, which assumedly had the power to cure diseases, has now been labelled ‘injurious to health’ – due to the complacency of both the public and the policymakers. The former won’t stop throwing waste in it. The latter has failed to stop it

The question is, who cares? The media has chosen to ignore the story and concentrate on Rahul Gandhi’s ‘hug-lomacy’. Nationalists are busy protecting lynch mobs attacking people over eating cows. In a country where people are being killed in the name of ‘Mother Cow’, their ‘Ganga Mother’ has been completely neglected. No one seems to bother because it is not the Muslims who are dirtying it but the Hindus. There is no caste or religious politics involved here. That is why no political or media outrage.

“The public won’t stop throwing waste in it. The policymakers have failed to stop it.”

The tribunal has powerful reasons to back its argument. The risk of contracting infectious diseases from the Ganga water is high. The toxicity of the river is made significantly worse by industrial activity along the riverbanks especially near Haridwar which shows the adverse impact of Industrialization, Urbanisation and Rapid growth of population on the river water quality. Industrial waste still accounts for twenty percent of the total pollution of the river. Modi government had come to power in 2014 with a pledge to rejuvenate Ganga, but nothing much have been done about it.

The flow of the river spans 1,569 miles across the subcontinent. Along the way, its banks are home to densely populated metros and sprawling communities. Industrial waste, human excrement and millions of litres of sewage – much of it untreated – is churned out in vast quantities into water used by millions to bathe their children, cook their food, wash their clothes, and water their crops.

Many plants continue to pump out six large volumes of toxic chemicals: acetone and arsenic, mercury and hydrochloric acid, sulfuric acids and heavy metals. Six million tonnes of fertilisers and nine thousand tonnes of pesticides find their way into the river yearly.

One of the most visceral and graphic pollutants which ends up in the Ganga with macabre regularity is human remains. In Varanasi alone, 200 tonnes of half-burnt flesh are deposited into the river every year.

The sight of bodies floating down the Ganga is far from uncommon. Hundreds drown in the river every year with few official records kept. Ashes are regularly scattered in the river as part of Hindu tradition. However, many families cannot afford the wood needed to incinerate bodies properly. As a result, many bodies are discarded in the river half-burnt or uncremated. In total, 100,000 bodies are believed to be discarded into the Ganga every year.

“Sewage…is churned out in vast quantities into water used by millions to bathe their children, cook their food, wash their clothes, and water their crops”

Cleaning up the Ganga is no mean feat and a task that has been undertaken by multiple governments in years past to great expense. However, little has been produced by way of results.

A $3 billion project to clean the river was announced after the BJP government came to power in 2014. A 2018 target was set for freeing the Ganga of pollution. Yet the undertaking was found last year to be massively behind schedule with much of the money allocated to it unspent – leaving efforts stalled and enormous swathes of the river still polluted.

“The Ganga’s downward journey of the past three decades is continuing,” Himanshu Thackar of the South Asia Network on Dams, Rivers and People warned the Centre earlier this year. “It has not reversed or changed in the past four years…apart from statements and plans, there seems to be no action.”

“Cleaning up the Ganga is…a task that has been undertaken by multiple governments in years past to great expense. However, little has been produced by way of results”

The Centre disputes the charge that it is failing to act. It says it is optimistic that it will clean up to eighty percent of the Ganga by March next year and says it is taking a hardline stance against industries which pollute the river. Yet the concerns of environmentalists and agencies, including the NGT, continue to mount. Discernible results, meanwhile, are not forthcoming.

Life is rapidly becoming unbearable for residents of the Ganga basin. Not only is the water polluted, it is in increasingly short supply. Climate change is shrinking the Gangotri glacier in the Himalayas, which feeds the Ganga seventy percent of its water. Every year, the Gangotri glacier loses 22 metres – meaning that water is rapidly becoming a scarcity for the half a billion people who depend on the Ganga for water to live.

Population increase will only engorge demand and shorten supplies further. As time drags on, and efforts continue to stall, life beside India’s sacred river will continue to be one of profound and unholy suffering.