You are here: Home / Access to Healthcare / Fewer Indians living with HIV but still miles to go 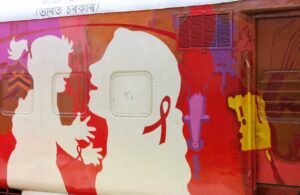 The findings were published by the Joint UN Agency on AIDS (UNAIDS), in a report titled “Miles To Go: Closing Gaps, Breaking Barriers, Righting Injustices.” Progress is being made, the reports says, but not at the pace needed to achieve global targets of less than 500,000 new HIV infections annually by 2020.

UNAIDS’ warning lends credence to the findings of a separate study published in The Lancet earlier this week, which identified complacency was a major threat to global efforts to control HIV/AIDS. In particular, it said that donor funding had plateaued and treatment was still difficult to access for the groups most at risk.

In India, obstacles continue to stand in the path of ending the HIV/AIDS challenge by 2030, as Union Health Minister J. P. Nadda intends. 31 percent of HIV-positive Indians are unaware of their status. Just 56 percent of those living with HIV are on treatment.

India has made inroads in addressing this situation. A government programme was announced a ‘test-and-treat’ strategy for HIV last year. Under the initiative, anyone who tests positive for the virus is to be immediately offered antiretroviral therapy (ART).

A further rethink on India’s approach to tackling HIV/AIDS could bring about broader public health benefits. The Lancet study advised an end to ‘AIDS exceptionalism’, a mindset which often engenders an approach where HIV/AIDS is tackled in isolation. However, as the UNAIDS data shows, there is significant potential for comorbidity in HIV/AIDS cases. For example, of the 2.1 million Indians living with HIV, 88,000 also suffer from tuberculosis.

“Just 56 percent of those living with HIV are on treatment.”

Data also suggests a comorbidity of HIV and noncommunicable diseases (NCDs). One recent study suggested the risk of heart disease is doubled by HIV infection.

One of the most prominent public health challenges facing India is managing its dual burden of NCDs and infectious conditions. A more integrated approach to detecting HIV/AIDS could be one way of tackling this challenge. Combining HIV testing with screening programmes for NCDs such as diabetes is one example of how this could be achieved.

The UNAIDS data lends an impression of the progress India (and the world) has made – and where the areas for improvement lie. Reinvigorating the country’s approach to addressing HIV/AIDS must be the way forward, with a view towards capitalising upon existing achievements and moving the crisis towards its resolution.

The UNAIDS study can be accessed here.