You are here: Home / Social issues / Senior lawyer compares chocolate to cigarettes, gets rap from SC 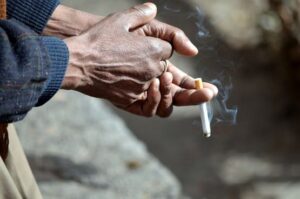 The Supreme Court has dismissed a petition challenging the Centre’s new guidelines for tobacco products.

From September 1, tobacco products – including cigarettes, bidis and chewing tobaccos – will have to display a new set of graphic images and text warnings such as ‘tobacco causes painful death’ and ‘tobacco causes cancer.’ The number for a toll-free quitline will also have to be displayed prominently.

“There has to be freedom of choice,” Senior Counsel Mukul Rohatgi (representing tobacco companies) argued before the SC. He questioned why similar restrictions are not in place for products such as chocolate. “If one eats chocolates,” Rohtagi argued, “they run the risk of becoming diabetic which may lead to glaucoma.”

The SC ruled against the petitioners, however, arguing that the new warnings are needed so that consumers can make an “informed choice” about using tobacco. Chief Justice Dipak Misra faulted Rohtagi on his chocolate analogy. “If you have diabetes, then you should abstain from chocolate,” he pointed out.

It is similarly worth noting that that chocolate can be safely enjoyed in moderation. By contrast, smoking just one cigarette a day can increase the risk of developing heart disease by fifty percent.

The case marks another victory for the Centre in a tobacco-related legal battle. In January the SC overturned a ruling made by the Kerala High Court (KHC) last year against a MoHFW directive that health warnings cover 85 percent of the packaging display area. The latest ruling is another indication that, in the tussle between the tobacco industry and public health, India’s apex court seems to be firmly on the side of public health.

The new health warnings will come into force from September 1st.